Amanda Foody and Christine Lynn Herman present "All of Us Villains" 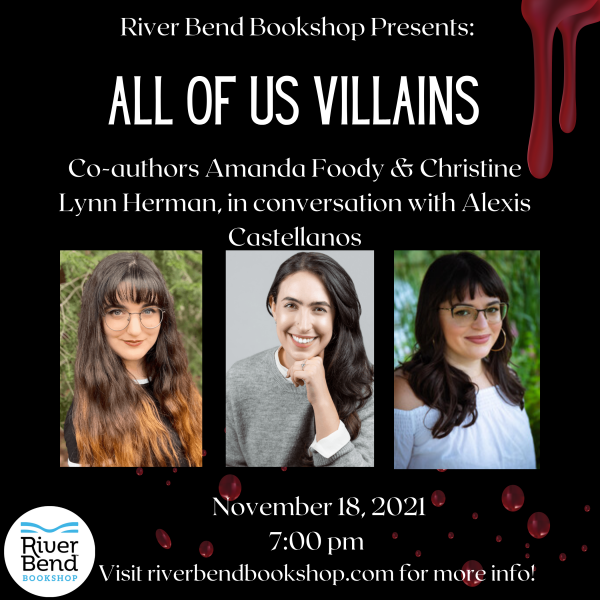 Welcome to the world of All of Us Villains!

You Fell In Love With The Victors of The Hunger Games.
Now Prepare To Meet The Villains of The Blood Veil.

After the publication of a salacious tell-all book, the remote city of Ilvernath is thrust into worldwide spotlight. Tourists, protesters, and reporters flock to its spellshops and ruins to witness an ancient curse unfold:
every generation, seven families name a champion among them to compete in a tournament to the death. The winner awards their family exclusive control over the city’s high magick supply, the most powerful resource in the world.

In the past, the villainous Lowes have won nearly every tournament, and their champion is prepared to continue his family’s reign.
But this year, thanks to the influence of their newfound notoriety, each of the champions has a means to win. Or better yet–a chance to rewrite their story.

But this is a story that must be penned in blood.

Amanda Foody is the author of YA novels Daughter of the Burning City and The Shadow Game series (HarperCollins/Inkyard), and the forthcoming middle grade series Wildlore: The Accidental Apprentice (Simon & Schuster/Margaret K. McElderry). Formerly an accountant preparing taxes for multinational corporations, Amanda lives in Boston with Jelly Bean, her feline beastly companion.

Christine Lynn Herman is the author of The Devouring Gray, its upcoming sequel The Deck of Omens, and a standalone contemporary fantasy called The Drowning Summer (Little, Brown/Hachette). You can find her in the nearest forest, attempting to become a tree, or on Twitter and Instagram at @christineexists.

Alexis Castellanos was born and raised in Florida where she enjoyed sunny days, dramatic thunderstorms, and delicious Cuban food. After graduating from college, she moved to New York City and worked as a scenic artist, bringing theatrical sets to life with a little bit of paint and a whole lot of ingenuity. She currently works as a graphic designer by day and spends her nights dreaming up stories. She lives in Los Angeles with her partner and her extremely photogenic cat, Belle. Isla to Island is her first graphic novel.

Click on a bookcover below to learn more or items to your cart.

All of Us Villains (Hardcover)

The Deck of Omens (The Devouring Gray #2) (Paperback)