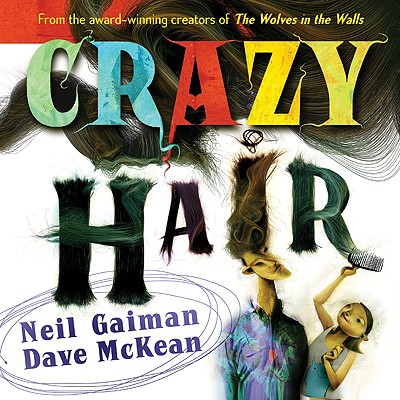 Crazy Hair is a fantastically fun tale written by New York Times bestselling author Neil Gaiman and illustrated by the astoundingly talented Dave McKean, the award-winning team behind The Wolves in the Walls.

In Crazy Hair, Bonnie makes a friend who has hair so wild there's even a jungle inside of it! Bonnie ventures through the crazy hair, but she may need more than a comb to tame her friend's insane mane.

Neil Gaiman is the #1 New York Times bestselling author of more than twenty books, including Norse Mythology, Neverwhere, and The Graveyard Book. Among his numerous literary awards are the Newbery and Carnegie medals, and the Hugo, Nebula, World Fantasy, and Will Eisner awards. Originally from England, he now lives in America.

Dave McKean is best known for his work on Neil Gaiman's Sandman series of graphic novels and for his CD covers for musicians from Tori Amos to Alice Cooper. He also illustrated Neil Gaiman's picture books The Day I Swapped My Dad for Two Goldfish, The Wolves in the Walls, and Crazy Hair. He is a cult figure in the comic book world, and is also a photographer.

River Bend Bookshop is located in the heart of Glastonbury Town Center, on Main Street just south of Hebron Ave.

We sell new books in all genres, plus a wide selection of stationery, puzzles and gifts.

This shop is a place where community gathers and connections are made.  Join us!