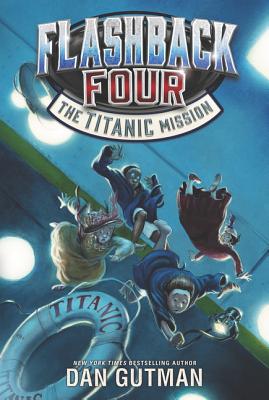 This is book number 2 in the Flashback Four series.

This time, Luke, Julia, David, and Isabel are headed to the deck of the doomed Titanic. Their mission? Capture a shot of the sinking ship, then come right back.

The only problem is, once they arrive aboard the ship, the four friends can’t agree on what to do next. Should they try to save the passengers? Or maybe bring back a priceless book before it sinks with the ship?

With real historical photographs to put young readers right in the action, plus back matter that separates fact from fiction, The Titanic Mission tells the story of the ship’s fateful last voyage like you’ve never seen it before.

“History can be hilarious, at least in the hands of author Dan Gutman.”
— Washington Post

“Breezy, good-natured fun and a fair amount of history, too”
— Kirkus Reviews

“A fun and fast read, illustrated with photos of the past that really do exist.”
— Booklist

“This will be a high-demand title.”
— School Library Journal