The Female of the Species (Paperback) 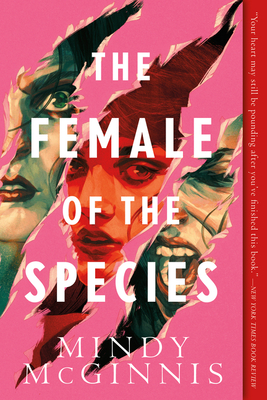 Alex Craft knows how to kill someone. And she doesn’t feel bad about it.

Three years ago, when her older sister, Anna, was murdered and the killer walked free, Alex uncaged the language she knows best—the language of violence.

While her own crime goes unpunished, Alex knows she can’t be trusted among other people. Not with Jack, the star athlete who wants to really know her but still feels guilty over the role he played the night Anna’s body was discovered. And not with Peekay, the preacher’s kid with a defiant streak who befriends Alex while they volunteer at an animal shelter. Not anyone.

As their senior year unfolds, Alex’s darker nature breaks out, setting these three teens on a collision course that will change their lives forever.

Mindy McGinnis is the author of Not a Drop to Drink and its companion, In a Handful of Dust, as well as This Darkness Mine, The Female of the Species, Given to the Sea, Heroine, and the Edgar Award–winning novel A Madness So Discreet. A graduate of Otterbein University with a BA in English literature and religion, Mindy lives in Ohio. You can visit her online at www.mindymcginnis.com.

★ “Each word has been specifically chosen, each character superbly and humanly sculpted, the plot line masterfully completed. To say more would be to dilute the experience. McGinnis plays with the readers and they are at her mercy.” — Voice of Youth Advocates (VOYA) (starred review)

★ “Whether a catcall, an unwelcome touch, or more, sexual aggression towards females happens daily; McGinnis explores how one teen uses violence for justice in this gripping story that should be read and discussed by teens, as well as those who work with them.” — Booklist (starred review)

★ “McGinnis gracefully avoids the pitfalls of creating a teenage vigilante, instead maintaining a sense of piercing realism. Alex is a pained girl in dangerous free fall, whose fierce independence is challenged by newfound friendships, even love, though neither may be enough to stave off the inevitable.” — Publishers Weekly (starred review)

★ “All three teens are haunted by the memory of Anna’s murder, and Alex’s inclination to both considering and exacting revenge with cruel efficiency leads them all inexorably to an explosive, terrible finale. An unflinching look at rape culture and its repercussions.” — Kirkus Reviews (starred review)

“It’s raw. Not ‘raw for YA.’ Real-deal raw. And violent. And unforgettable. McGinnis explores both and she goes there in a way no one really has before in YA. This is Kill Bill in high school, but with more nuance, bolder choices and a true female perspective.” — The Globe and Mail

“Your heart may still be pounding after you’ve finished this book. It is uncannily well timed to our current political situation...McGinnis, who dedicates her book to ‘the victims,’ examines this dichotomy of hope and violence, love and hate, with dexterity and grace.” — The New York Times Book Review

“The ending of this dark novel leaves much to be unpacked, and it would certainly spark heated discussion in a book club or classroom.” — Bulletin of the Center for Children’s Books

McGinnis’s novel about a teenage girl who avenges her sister’s rape and murder and becomes a self-created human weapon is a gut punch that will leave you reassessing everything you thought you knew about the lives of young women.” — NY Mag