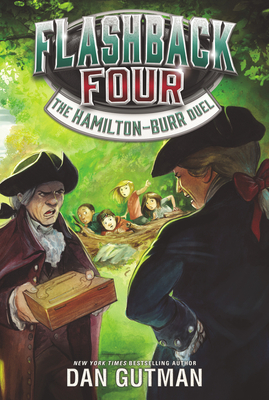 By Dan Gutman
Please contact us for more details
Backordered

This is book number 4 in the Flashback Four series.

Billionaire Miss Z might be out of the picture, but a top-secret agency wants to send Luke, Julia, David, and Isabel on one final mission. This time, the Flashback Four are headed to Weehawken, New Jersey—in 1804—to videotape the fateful duel between Alexander Hamilton and Aaron Burr.

But once they arrive, the team faces a question of historic proportions: Should they capture the tragic details of the duel or try to change them?

With real photographs to help put young readers right in the action, plus back matter that separates fact from fiction, The Hamilton-Burr Duel tells the story of one of history’s fiercest rivalries from a fun and fresh new angle.