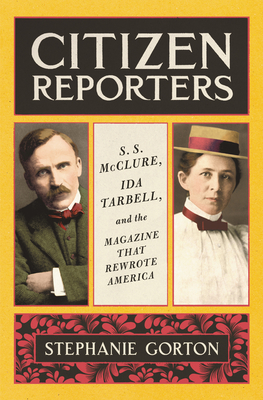 A fascinating history of the rise and fall of influential Gilded Age magazine McClure’s and the two unlikely outsiders at its helm—as well as a timely, full-throated defense of investigative journalism in America

The president of the United States made headlines around the world when he publicly attacked the press, denouncing reporters who threatened his reputation as “muckrakers” and “forces for evil.” The year was 1906, the president was Theodore Roosevelt—and the publication that provoked his fury was McClure’s magazine.

One of the most influential magazines in American history, McClure’s drew over 400,000 readers and published the groundbreaking stories that defined the Gilded Age, including the investigation of Standard Oil that toppled the Rockefeller monopoly. Driving this revolutionary publication were two improbable newcomers united by single-minded ambition. S. S. McClure was an Irish immigrant, who, despite bouts of mania, overthrew his impoverished upbringing and bent the New York media world to his will. His steadying hand and star reporter was Ida Tarbell, a woman who defied gender expectations and became a notoriously fearless journalist.

The scrappy, bold McClure's group—Tarbell, McClure, and their reporters Ray Stannard Baker and Lincoln Steffens—cemented investigative journalism’s crucial role in democracy. From reporting on labor unrest and lynching, to their exposés of municipal corruption, their reporting brought their readers face to face with a nation mired in dysfunction. They also introduced Americans to the voices of Willa Cather, Arthur Conan Doyle, Robert Louis Stevenson, Joseph Conrad, and many others.

Tracing McClure’s from its meteoric rise to its spectacularly swift and dramatic combustion, Citizen Reporters is a thrillingly told, deeply researched biography of a powerhouse magazine that forever changed American life. It’s also a timely case study that demonstrates the crucial importance of journalists who are unafraid to speak truth to power.

Stephanie Gorton has written for NewYorker.com, Smithsonian.com, the Los Angeles Review of Books, The Toast, The Millions, and other publications. Previously, she held editorial roles at Canongate Books, the Overlook Press, and Open Road. A graduate of the University of Edinburgh and Goucher College’s MFA program in creative nonfiction, she lives in Providence, Rhode Island, with her family.

“All great editors have an eye for talent. After reading “Citizen Reporters,” I’m convinced that McClure had the greatest eye of all time…. Well crafted and readable…. Nuanced.” — Wall Street Journal

"[Gorton] explores the clash and interplay of talents that created an entity greater than the sum of its parts, absorbed in an endeavor as important now as it was then: molding coherent narratives that help readers—surrounded by a cacophony of daily stories—grasp the changes they are living through." — The Atlantic

"Reading Stephanie Gorton’s smart and engaging Citizen Reporters summoned rhythms of a past whose cadence can be felt in the present.... Fascinating.... Gorton provides readers with a rich context for understanding the historical and cultural milieu." — Minneapolis Star Tribune

“[As] Gorton reveals, McClure’s magazine (1893–1931) was instrumental in paving the way for reporters to battle corruption and drive change in society.… Readers interested in Gilded Age history and its parallels to contemporary society will enjoy learning about this trailblazing publication.” — Library Journal

“Exciting . . . Stephanie Gorton has written more than a beautifully crafted and original narrative history. She reminds us of  the courage and passion that fearless magazine journalists must find once again to reveal the true American landscape.”
— Michael Capuzzo, New York Times bestselling author of Close to Shore and The Murder Room

“Citizen Reporters is a vibrant tale of courage and perseverance. With a thorough and steady hand, Stephanie Gorton guides the reader back in time, telling the origin story of America’s long tradition of bold and incisive journalism. Ida Tarbell and S.S. McClure’s inner lives are interwoven in a story of feminism and American reporting that will have a lasting impact on its readers.” — Abby Phillip, CNN White House Correspondent

“In an era newly-conscious of journalism driven by exposing wrongdoing, Citizen Reporters stands as an essential read of America’s long history with reporting on urgent matters of social justice.” — Eliza Griswold, Pulitzer Prize-winning author of Amity and Prosperity

“Citizen Reporters is beautifully written, deeply reported, and worthy of its very worthy subjects. Through the stories of S.S. McClure, his star reporter Ida Tarbell, and the writers associated with McClure’s magazine, Stephanie Gorton gives us a fascinating glimpse of a formative time in American history—and reveals the urgent and necessary role played by investigative journalists.” — Louisa Thomas, author of Louisa: The Extraordinary Life of Mrs. Adams

“Anyone who loves journalism will revel in this story of an unlikely partnership that shaped the media business, helped to define investigative reporting, and showed Americans the injustices and inequities in our midst. We wouldn’t be the country we are today without McClure’s.” — Sasha Issenberg, author of The Victory Lab

"Citizen Reporters offers a fascinating exploration of the adventurous work produced at McClure’s. In Stephanie Gorton’s crisp, fast-moving narrative, we come to know, love, and fear visionary editor S.S. McClure. Even more memorably, we meet top journalist Ida Tarbell, whose stamp on the science and craft of in-depth reporting remains indelible more than a century later. This is a fun, absorbing story with surprises on just about every page." — Earl Swift, author of Chesapeake Requiem

"S.S. McClure altered the realm of magazines while educating the public. Then Ida Tarbell, while breaking gender barriers, altered American democracy for the better. Bravo for Stephanie Gorton for bringing the saga to a new generation of readers."  — Steve Weinberg, former executive director of Investigative Reporters and Editors

"In an era echoing our own, two trailblazing journalists -- one a fearless woman -- confront the monied interests and political corruption that distort the fundamental fairness of American society.  Stephanie Gorton's beautifully shaped and closely researched narrative shows how the same manic energy that propelled its founder to embrace such a high-risk and pioneering venture ultimately led to McClure's demise.  We can be grateful that its legacy lives on."
— Peter Stark, author of Young Washington: How Wilderness and War Forged America's Found Father