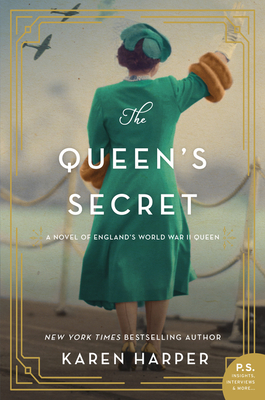 If you love Jennifer Robson or The Crown you will love New York Times bestselling author Karen Harper’s novel about Elizabeth, The Queen Mother.

1939. As the wife of the King George VI and the mother of the future queen, Elizabeth—“the queen mother”—shows a warm, smiling face to the world. But it’s no surprise that Hitler himself calls her the “Most Dangerous Woman in Europe.” For behind that soft voice and kindly demeanor is a will of steel.

Two years earlier, George was thrust onto the throne when his brother Edward abdicated, determined to marry his divorced, American mistress Mrs. Simpson. Vowing to do whatever it takes to make her husband’s reign a success, Elizabeth endears herself to the British people, and prevents the former king and his brazen bride from ever again setting foot in Buckingham Palace.

Elizabeth holds many powerful cards, she’s also hiding damaging secrets about her past and her provenance that could prove to be her undoing.

In this riveting novel of royal secrets and intrigue, Karen Harper lifts the veil on one of the world’s most fascinating families, and how its “secret weapon” of a matriarch maneuvered her way through one of the most dangerous chapters of the century.

New York Times and USA Today bestselling author KAREN HARPER is a former Ohio State University instructor and high school English teacher. Published since 1982, she writes contemporary suspense and historical novels about real British women. Two of her recent Tudor-era books were bestsellers in the UK and Russia. Harper won the Mary Higgins Clark Award for Dark Angel, and her novel Shattered Secrets was judged one of the best books of the year by Suspense Magazine.

“If you thought the Queen Mum was a benign, plump, cheery old lady, think again. In Karen Harper’s novel she is tough, determined, and fabulously gossipy. Reading this novel is like sitting next to an indiscreet royal insider at a private dinner.”
— Gill Paul, bestselling author of The Lost Daughter

"...readers will appreciate the Queen Mother's story as the woman behind the crown is given a chance to shine on her own with all her faults and glory."
— Booklist

"The Windsors continue to fascinate as we watch a new generation grow up. Harper’s novel draws attention to the heroism and strength of the royal family during a trying time in history. A strong selection for those interested in a more personal imagining of royal life at that time."
— Library Journal

Praise for American Duchess: “This absorbing and evocative tale is an excellent reminder of what women have long sacrificed over the centuries for family honor and duty, and how they navigated their circumstances and influence to change the world for the better.”
— Heather Webb, international bestselling author of Last Christmas in Paris

Praise for The It Girls: “The It Girls is a glorious romp through the lives and loves of the scintillating Sutherland sisters.... Readers who enjoy historical fiction are in for a treat!”