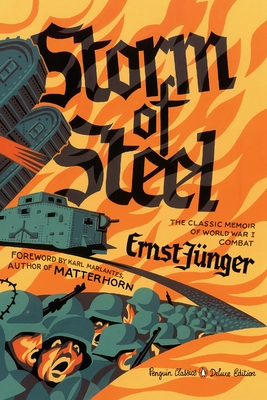 One of the great war memoirs, published here in a stunning Deluxe Edition for the centenary of World War I and the Battle of the Somme—and featuring a foreword by the New York Times bestselling author of Matterhorn

A worldwide bestseller published shortly after the end of World War I, Storm of Steel is a memoir of astonishing power, savagery, and ashen lyricism. It illuminates not only the horrors but also the fascination of total war, as seen through the eyes of an ordinary German soldier.

Young, tough, patriotic, but also disturbingly self-aware, Ernst Jünger exulted in the Great War, which he saw not just as a great national conflict but also—more importantly—as a unique personal struggle. Leading raiding parties, defending trenches against murderous British incursions, simply enduring as shells tore his comrades apart, Jünger keeps testing himself, braced for the death that will mark his failure. His account is ripe for rediscovery upon the centennial of the Battle of the Somme—a major set piece in Storm of Steel—and a bracing read for fans of Redeployment and American Sniper.

For more than seventy years, Penguin has been the leading publisher of classic literature in the English-speaking world. With more than 1,700 titles, Penguin Classics represents a global bookshelf of the best works throughout history and across genres and disciplines. Readers trust the series to provide authoritative texts enhanced by introductions and notes by distinguished scholars and contemporary authors, as well as up-to-date translations by award-winning translators.

Ernst Jünger (1895–1998) was born in Heidelberg, Germany. He ran away from school and volunteered to join the German army in 1914. Fighting throughout World War I, he recorded his experiences in several books, most famously in Storm of Steel.

Karl Marlantes (foreword) is the New York Times bestselling author of Matterhorn and What It Is Like to Go to War. He served as a Marine in the Vietnam War, where he was awarded the Navy Cross, the Bronze Star, two Navy Commendation Medals for valor, two Purple Hearts, and ten air medals. He lives near Duvall, Washington.

Neil Gower (cover illustrator) is an internationally acclaimed graphic artist. He spent ten years as a contributing artist to Condé Nast Traveler and has provided art for major publishing houses and for such magazines as The New Yorker, The Economist, and Vanity Fair. He lives in Sussex, England.

“An articulate, often beautifully so, introduction to the world view of a different breed of man: the born warrior.” —Karl Marlantes, author of Matterhorn, from the Foreword

“The definitive World War I account from the German point of view.” —Margaret Atwood, Entertainment Weekly

“Storm of Steel is what so many books claim to be but are not: a classic account of war.” —London Evening Standard

“Extraordinary . . . Michael Hofmann’s superlative translation retains all the coruscating vitality of the original.” —Niall Ferguson, author of Civilization, Colossus, and The Ascent of Money