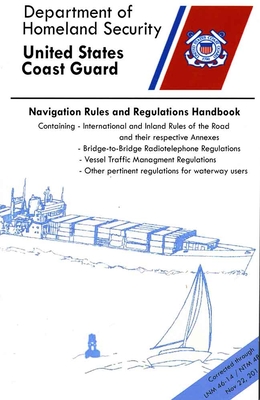 By Coast Guard (U.S.) (Editor)
Email or call for price (info@riverbendbookshop.com)
Inquire with a bookseller before ordering. Call 860.430.6608.

Sailing across the friendly seas!
This updated resource contains International and Inland Rules of the Road and their respective Annexes, Bridge-to-Bridge Radio Telephone Regulations, Vessel Traffic Management Regulations, and Other pertinent regulations for waterway users.

The International Rules in this book were formalized in the Convention on the International Regulations for Preventing Collisions at Sea, 1972, and became effective on July 15, 1977. The Rules (commonly called 72 COLREGS) are part of the Convention, and vessels flying the flags of states ratifying the treaty are bound to the Rules. The United States has ratified this treaty and all United States flag vessels must adhere to these Rules where applicable. President Gerald R. Ford proclaimed 72 COLREGS and the Congress adopted them as the International Navigational Rules Act of 1977.
The 72 COLREGS were developed by the Inter-Governmental Maritime Consultative Organization (IMCO) which in May 1982 was renamed the International Maritime Organization (IMO).  The IMO adopted 9 amendments which entered into force November 29, 2003. Lastly, a single amendment was adopted which updated the Distress signals and entered into force on December 1, 2009. The International Rules in this book contain these amendments.

The Inland Rules in this book replace the old Inland Rules, Western Rivers Rules, Great Lakes Rules, their respective pilot rules and interpretive rules, and parts of the Motorboat Act of 1940

On May 17, 2010 the US Coast Guard published a Final Rule which placed the Inland Navigational Rules into the Code of Federal Regulations. This move was in accordance with the Coast Guard and Maritime Transportation Act of 2004, which repealed the Inland Navigation Rules as they appeared in United States Code.  This Handbook supersedes Commandant Instruction M16672.2D, Navigation Rules: International−Inland. It maintains the same format and provides additional and updated content. Not all U.S. Navigation Regulations found in Title 33 of the Code of Federal Regulations are contained in this handbook.

Audience: Coast Guard and Navy personnel, sailors, boat/ship crew captains and other personnel, vessel operators, and mariners may be interested in this regulatory volume.

Other navigational charts can be found at this link: https://bookstore.gpo.gov/catalog/transportation-navigation/almanacs-nav...

Other resources for navigation by water can be found here: https://bookstore.gpo.gov/catalog/transportation-navigation/almanacs-nav...