The Last and Greatest Battle: Finding the Will, Commitment, and Strategy to End Military Suicides (Hardcover) 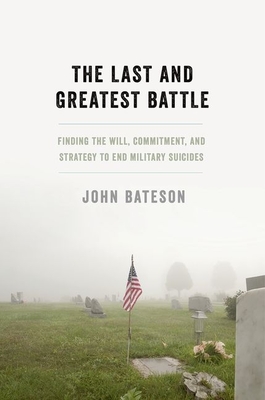 Nearly every day an active-duty soldier in the United States military resorts to suicide, and nearly every hour a veteran does the same. In recent years the problem of military suicides has reached epidemic proportions, but it's all too easy for most of us to gloss over the headlines or tune
out the details. In The Last and Greatest Battle--the first book devoted exclusively to the problem of military suicides--John Bateson brings this neglected crisis into the spotlight. Bateson, the former executive director of a nationally certified suicide prevention center, surveys the history of suicide in the
United States military from the Civil War to the present day and outlines a plan to save lives-and ultimately end the tragedy of military suicides. He uses the stories of individual soldiers to illuminate the unique challenges faced by American troops today. Transitioning from the front lines to the home front is difficult for many service members, and many need help both during and after their deployments. But even though the military is
spending millions of dollars on suicide prevention programs, record numbers of soldiers continue to take their lives. To that end, Bateson outlines a plan of action. If the military works to remove stigma, to make treatment more effective and more accessible, and to limit risk factors for suicide in the first place by taking measures like reducing the number and length of deployments and adjusting pre-deployment
training to take into account the way that wars are waged today, an end to the problem of military suicide is as possible as it is essential.

John Bateson is the author of The Final Leap: Suicide on the Golden Gate Bridge. For more than 15 years he was executive director of a nationally certified suicide prevention center in the San Francisco Bay Area. He served on the steering committee of the National Suicide Prevention Lifeline and waspart of a blue-ribbon committee that created the California Strategic Plan on Suicide Prevention.