Trials of the Earth: The True Story of a Pioneer Woman (Paperback) 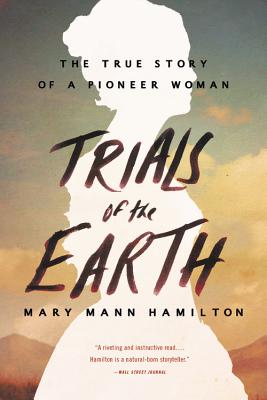 The astonishing first-person account of Mississippi pioneer woman struggling to survive, protect her family, and make a home in the early American South.

Near the end of her life, Mary Mann Hamilton (1866 - c.1936) began recording her experiences in the backwoods of the Mississippi Delta. The result is this astonishing first-person account of a pioneer woman who braved grueling work, profound tragedy, and a pitiless wilderness (she and her family faced floods, tornadoes, fires, bears, panthers, and snakes) to protect her home in the early American South.

An early draft of Trials of the Earth was submitted to a writers' competition sponsored by Little, Brown in 1933. It didn't win, and we almost lost the chance to bring this raw, vivid narrative to readers. Eighty-three years later, in partnership with Mary Mann Hamilton's descendants, we're proud to share this irreplaceable piece of American history. Written in spare, rich prose, Trials of the Earth is a precious record of one woman's extraordinary endurance and courage that will resonate with readers of history and fiction alike.

Mary Mann Hamilton was one of the only women to write about homesteading in the Mississippi Delta. Her legacy lives on in her children and their descendants, many of whom still live in the area Hamilton writes about.

One of the Best Books of the Year, The Chicago Tribune—

"It's the backstory that will first grab a reader, but it's Hamilton's gift for storytelling in her blunt voice that makes this memoir such a standout. . . . Beyond everything else, this memoir impresses on readers just how easy it was to vanish in an earlier America.... How fortunate that the manuscript of Trials of the Earth didn't meet that same fate."—Maureen Corrigan, NPR's Fresh Air

"A riveting and instructive read.... Hamilton is a natural-born storyteller.... [Her] first-person accounts are important testimonials about what used to be."—Melanie Kirkpatrick, Wall Street Journal

"Magnificent. Told with precision and searing honesty, Hamilton's captivating and cinematic autobiography deserves to be a classic."—Ann Weisgarber, author of The Personal History of Rachel DuPree and The Promise

"Wherever there is men's work, you can bet women's work is happening invisibly in the background. Trials of the Earth is a firsthand account of this backbreaking labor.... It's impossible not to root for this woman."—Amy Gentry, Chicago Tribune

"A reminder of how punishing the physical struggle could be, and how unspeakably lonely a woman's life was when men were clearing the land."—Rosellen Brown, New York Times Book Review


"Draws the reader right into the hardscrabble minutiae of the daily struggle for survival on an untamed and unforgiving frontier.... Hamilton's rich personal tapestry is a testament to endurance and to the indomitable spirit of the often overlooked American pioneer woman."
—Margaret Flanagan, Booklist


"Hamilton's matter-of-factness wins you over almost immediately, and unexpectedly.... Most remarkably, this book somehow enables a reader not to feel abject guilt at complaining about the temperature of their latte, but only a genuine gratefulness and admiration for those who went before."—Kim Ode, Minneapolis Star Tribune

"Fast-paced, inspirational and fascinating.... Mary Mann Hamilton's life was an endurance test and Trials of the Earth is her remarkable story.... Modern women will marvel at Hamilton's grueling daily schedule.... There are valuable lessons to be gleaned from Hamilton's pioneer code of conduct."—Patricia Dawn Robertson, Toronto Star

"Much has been written about the bold, gritty women who helped settle the American West. Much less attention has been paid to the female pioneers who muscled their way into other unsettled regions during the late 1800s. Trials of the Earth...goes far in filling that gap.... [and] underscores the huge power of unvarnished storytelling.... This is an unblinking narration of a life hard-lived by a woman who never lost her strength, humor or morality."—Sharon Peters, USA Today (3/4 stars)

River Bend is a community resource, and our intention is to remain available to serve you.  As of 3/17 our doors are closed to browsing.  We remain open for phone and web orders, with adjusted hours.  M-F 10-4, Saturday 10-2 and temporarily closed on Sunday.

Your support during this time is critical, and we have many ways for you to continue to patronize our small business.  Call for no-touch curbside pickup.  Shop online and request free Glastonbury delivery.  Have orders shipped, with free media mail for orders over $100. Consider switching to Libro.FM for your audiobooks, directly benefiting River Bend.