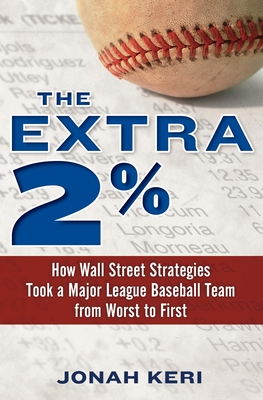 What happens when three financial industry whiz kids and certified baseball nuts take over an ailing major league franchise and implement the same strategies that fueled their success on Wall Street? In the case of the 2008 Tampa Bay Rays, an American League championship happens—the culmination of one of the greatest turnarounds in baseball history.

In The Extra 2%, financial journalist and sportswriter Jonah Keri chronicles the remarkable story of one team’s Cinderella journey from divisional doormat to World Series contender. When former Goldman Sachs colleagues Stuart Sternberg and Matthew Silverman assumed control of the Tampa Bay Devil Rays in 2005, it looked as if they were buying the baseball equivalent of a penny stock. But the incoming regime came armed with a master plan: to leverage their skill at trading, valuation, and management to build a model twenty-first-century franchise that could compete with their bigger, stronger, richer rivals—and prevail.

Together with “boy genius” general manager Andrew Friedman, the new Rays owners jettisoned the old ways of doing things, substituting their own innovative ideas about employee development, marketing and public relations, and personnel management. They exorcized the “devil” from the team’s nickname, developed metrics that let them take advantage of undervalued aspects of the game, like defense, and hired a forward-thinking field manager as dedicated to unconventional strategy as they were. By quantifying the game’s intangibles—that extra 2% that separates a winning organization from a losing one—they were able to deliver to Tampa Bay something that Billy Beane’s “Moneyball” had never brought to Oakland: an American League pennant.

A book about what happens when you apply your business skills to your life’s passion, The Extra 2% is an informative and entertaining case study for any organization that wants to go from worst to first.

Jonah Keri is the co-author and editor of Baseball Between the Numbers: Why Everything You Know About the Game Is Wrong, as well as a contributor to ESPN.com, SI.com, Baseball Prospectus, The New York Times, The Wall Street Journal, and other publications. He writes the flagship stock market column for Investor’s Business Daily and has been named the lead baseball analyst for the new Bloomberg sports venture.

“The rise of the Rays over the last half-decade has been so improbable it seems as if it was done by magic. It wasn’t. It took hard work, know-how, luck, and—as the title of this book suggests—those little moves on the margins that make all the difference. THE EXTRA 2% is far from a financial research paper, though—it is a fun, lively, and very smart read that might just make you into a Rays fan.” —Will Leitch, author of Are We Winning?

“Tampa Bay winning the American League East ahead of the Yankees and the Red Sox twice in three years is one of the most underappreciated sports accomplishments of the last twenty years. Jonah Keri has written a combination business book and wonderful collection of anecdotes that should allow the reader to easily answer the question ‘What was Tampa Bay thinking?’ as well as understand how difficult it will always be for a team in that market to open its competitive window for longer than three years at a time.” —Peter Gammons, three-time National Sportswriter of the Year

“The Tampa Bay Rays—with their ma-and-pa-sized budget—have gone head to head with baseball’s two superpowers, the Yankees and the Red Sox. In the superb THE EXTRA 2%, Jonah Keri explains how and why in a way that will remind readers of Michael Lewis’s Moneyball.”
—Buster Olney, senior writer, ESPN The Magazine, and author of How Lucky You Can Be

“All baseball fans ever ask for is hope: hope not only for a season out of their dreams, but also for leaders smart enough and imaginative enough to figure out how to make those dreams reality. In THE EXTRA 2%, Jonah Keri not only presents this blueprint followed to perfection but does so with a brilliant page-turner of a book that will satisfy fans of both baseball and first-rate writing.” —Mike Vaccaro, columnist, the New York Post

“There are a million ways to build a World Series team, but no one has ever built one quite like the Wall Street escapees in Tampa Bay. After reading Jonah Keri’s brilliant account of the Rays’ rise from laugh track to payback, I found myself thinking, ‘The heck with Moneyball. Give me Equityball.’ ” —Jayson Stark, senior writer, ESPN.com