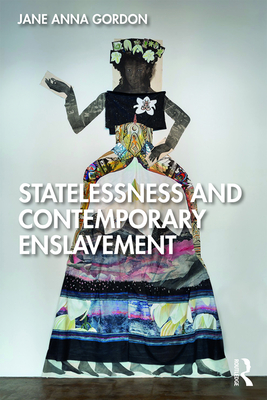 By Jane Gordon
Email or call for price (info@riverbendbookshop.com)

Why have statelessness and contemporary enslavement become endemic since the 1990s? What is it about global political economic policies, protracted warfare, and migration rules and patterns that have so systemically increased these extreme forms of vulnerability? Why have intellectual communities largely ignored or fundamentally rejected the concepts of statelessness and contemporary enslavement? This book argues that statelessness and enslavement are not aberrations or radical exceptions. They have been and are endemic to Euromodern state systems. While victims are discrete outcomes of similar processes of the racialized debasement of citizenship, stateless people share the predicament of those most likely to be enslaved and the enslaved, even when formally free, often face situations of statelessness. Gordon identifies forcible inclusion of semi-sovereign nations, extralegal expulsion of people who cannot be repatriated, and the concentrated erosion of the rights of full-fledged citizens as the primary modes through which people experience degrees of statelessness. She argues for the political value of seeing the connections among these discrete forms. With enslavement, she insists that while the centuries-long practice has taken on some new guises necessary to its profitability in the current global economy, what and who it involves have remained remarkably consistent. Rather than focusing on slavery as a radical and exceptional extreme of abuse or coercion, Gordon contends that we can understand contemporary slavery's specificity most usefully through considering its defining dimensions together with those of wage laborers and guest workers. Gordon concludes that appreciation of the situation of the stateless and of the enslaved should fundamentally orient our thinking about viable contemporary conceptions of consent and of the kinds of twenty-first-century political institutions that would make it harder for some to make the vulnerability of others so lucrative.

Jane Anna Gordon teaches and directs the graduate program in Political Science at the University of Connecticut, USA. She is, most recently, author of Creolizing Political Theory: Reading Rousseau through Frantz Fanon and co-editor (with Cyrus E. Zirakzadeh) of The Politics of Richard Wright: Perspectives on Resistance and co-editor (with Drucilla Cornell) of the forthcoming Creolizing Rosa Luxemburg. She was President of the Caribbean Philosophical Association from 2013 to 2016. Gordon co-edits the Creolizing the Canon and Global Critical Caribbean Thought book series.