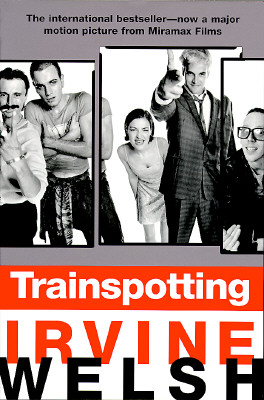 It accomplished for its own time and place what Hubert Selby, Jr.'s Last Exit to Brooklyn did for his. Rents, Sick Boy, Mother Superior, Swanney, Spuds, and Seeker are as unforgettable a clutch of junkies, rude boys, and psychos as readers will ever encounter. Trainspotting was made into the 1996 cult film starring Ewan MacGregor and directed by Danny Boyle (Shallow Grave).

The language in Trainspotting is... exhilarating once you get the hang of it, and finally poetic in its complications.... Literary in the best sense, using language at every level to tell a story.

Blisteringly funny.... Don't abandon everything for the movie. It's worth making the effort with Trainspotting not merely because relatively few writers have rummaged through this particular enclave of British youth culture, but because even fewer have dug there so deeply.

It is funny, unflinchingly abrasive, authentic, and inventive, unerringly on—and off—the pulse. It is a true cult, the kind of novel you press on perfect strangers. It validates a world fiction hasn't recognized before.
— Times Out

Irvine Welsh writes with skill, wit, and compassion that amounts to genius. He is the best thing that has happened to British writing in decades.
— Nick Hornby - Sunday Times

Irvine Welsh may become one of the most significant writers in Britain. He writes with style, imagination, wit, and force, and in a voice which those alienated by much current fiction clearly want to hear.
— Times Literary Supplement