The Very Busy Spider (Board book) 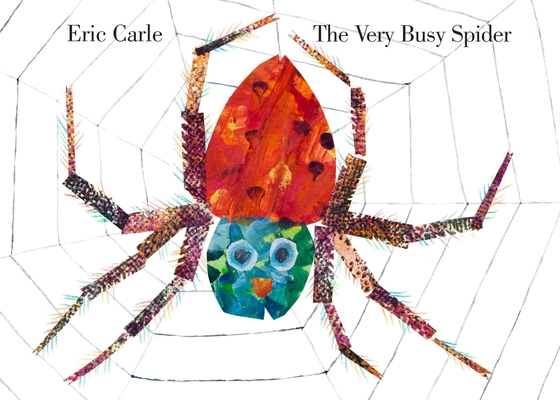 From bestselling author and illustrator Eric Carle, the creator of The Very Hungry Caterpillar, comes another classic tale about one very busy spider. A perfect gift to share with the child or grandchild in your life.

Early one morning a little spider spins her web on a fence post. One by one, the animals of the nearby farm try to distract her, yet the busy little spider keeps diligently at her work. When she is done, she is able to show everyone that not only is her creation quite beautiful, it is also quite useful!

This multi-sensory board book allows children to feel the pictures as well as see them, and is the perfect size for little hands. With its rhythmic text, The Very Busy Spider becomes an experience to touch, to see, and to hear.

"A beautifully executed work for the very young that satisfies the needs of both visually handicapped and sighted children without losing its artistic integrity."
—The Horn Book, starred review

"Both sighted and blind children will follow the action with ease . . . Visually and verbally, this is a winner."
—Booklist, starred review.

Eric Carle is acclaimed and beloved as the creator of brilliantly illustrated and innovatively designed picture books for very young children. His best-known work, The Very Hungry Caterpillar, has been translated into 70 languages and sold over 55 million copies. Carle illustrated more than seventy books, many best sellers, most of which he also wrote, and more than 170 million copies of his books have sold around the world. In 2003, Carle received the Laura Ingalls Wilder Award (now called the Children’s Literature Legacy Award) for lifetime achievement in children's literature. In 2002, Eric and his wife, Barbara, cofounded The Eric Carle Museum of Picture Book Art (www.carlemuseum.org) in Amherst, Massachusetts, a 40,000-square-foot space dedicated to the celebration of picture books and picture book illustrations from around the world, underscoring the cultural, historical, and artistic significance of picture books and their art form. Eric Carle passed away in May 2021 at the age of 91. His work remains an important influence on artists and illustrators at work today. www.eric-carle.com

Praise for The Very Busy Spider:

* "A beautifully executed work for the very young that satisfies the needs of both visually handicapped and sighted children without losing its artistic integrity."--The Horn Book, starred review

* "Both sighted and blind children will follow the action with ease . . . Visually and verbally, this is a winner."--Booklist, starred review