Bet the Farm: How Food Stopped Being Food (Hardcover) 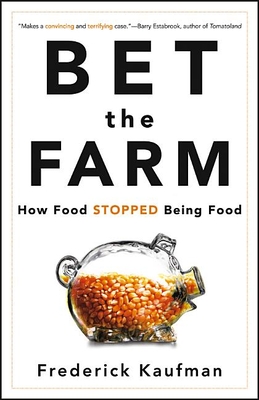 A prominent food journalist follows the trail from Big Pizza to square tomatoes to exploding food prices to Wall Street, trying figure out why we can't all have healthy, delicious, affordable food

In 2008, farmers grew enough to feed twice the world's population, yet more people starved than ever before--and most of them were farmers. In Bet the Farm, food writer Kaufman sets out to discover the connection between the global food system and why the food on our tables is getting less healthy and less delicious even as the the world's biggest food companies and food scientists say things are better than ever. To unravel this riddle, he moves down the supply chain like a detective solving a mystery, revealing a force at work that is larger than Monsanto, McDonalds or any of the other commonly cited culprits--and far more shocking.

Kaufman's recent cover story for Harper's, The Food Bubble, provoked controversy throughout the food world, and led to appearances on the NBC Nightly News, MSNBC, Fox Business News, Democracy Now, and Bloomberg TV, along with features on National Public Radio and the BBC World Service.

FREDERICK KAUFMAN is a contributing editor at "Harper's" and teaches at the City University of New York's Graduate School of Journalism. He has written about American food culture for "Foreign Policy," "Wired," the "New Yorker," "Gourmet," the "New York Times Magazine," and others. He has spoken about food justice and food politics at the General Assembly of the UN and appeared on MSNBC, Fox Business News, "Democracy Now!," and public radio's "Radiolab," "On the Media," and the BBC World Service.