Some Theory of Sampling (Dover Books on Mathematics) (Paperback) 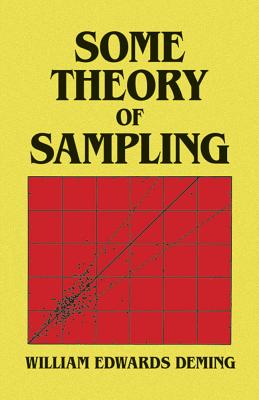 By William Edwards Deming
$22.95
Email or call for price

Analysis of the problems, theory, and design of sampling techniques for social scientists, industrial managers, and others who find statistics increasingly important in their work. Only college algebra assumed. Illustrated with dozens of actual large-scale surveys in government and industry. "The 'bible' of sampling statisticians." -- American Statistical Association Journal. 1950 edition.

W. Edwards Deming: Notable & Quotable W. Edwards Deming (1900-1993) was a statistician who pioneered the application of statistical techniques to the solving of manufacturing and industrial problems, especially in the area of quality control. Working in Japan after World War II, he became famous for the acceptance his theories had among leaders of Japanese industry, and so made a significant contribution to Japan's spectacular industrial growth in the following decades. A frequent consultant, author, and lecturer, Deming was known for incisive quotations that aimed at the heart of the matter. Dover first reprinted Some Theory of Sampling, his classic book on statistical sampling techniques, in 1985. In the Author's Own Words: "In God we trust; all others must bring data." "If you can't describe what you are doing as a process, you don't know what you are doing." "Learning is not compulsory . . . neither is survival." "The average American worker has fifty interruptions a day, of which seventy percent have nothing to do with work." -- W. Edwards Deming Critical Acclaim for Some Theory of Sampling "It seems likely that for some time to come this book will be the 'bible' of sampling statisticians." -- American Statistical Association Journal