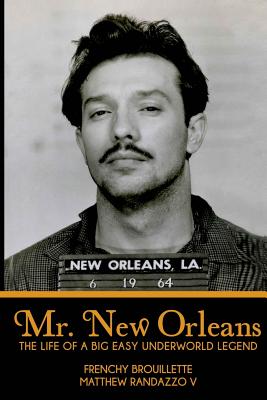 Wiseguys called him "the Keith Richards of the American Mafia" and JFK hero Jim Garrison denounced him as "one of the most notorious vice operators in the history of New Orleans" ... but you can just call him MR. NEW ORLEANS. Mr. New Orleans tells the incredible story of Frenchy Brouillette, a redneck Cajun teenager who stole his big brother's motorcycle and embarked on a 60-year vacation to New Orleans, where he became a legendary gangster and the underworld political fixer for his cousin, Louisiana Governor Edwin Edwards. Written by Crescent City native Matthew Randazzo V, the wickedly funny Mr. New Orleans is the first book to ever break the code of secrecy of the New Orleans Mafia Family, the oldest and most mysterious criminal secret society in America. "Mr. New Orleans is a rollicking, disturbing ride through the underbelly of a bygone New Orleans, lined with moments of dark, side-splitting hilarity. If you're a fan of James Lee Burke, drop what you're reading and pick this one up. In an era when popular wisdom tells us T.V. has stolen all depth from the literary true-crime narrative, Matthew Randazzo has found a way to beat that trend mightily; he's gone straight to the source and captured the singular, confounding voice of the New Orleans' mafia's top political fixer with fast-paced, riveting prose and a fine journalist's eye for detail." Chris Rice, New York Times Bestselling Author "Mr. New Orleans is a total knockout: Take everything you ever imagined about the sleazy good times to be had in New Orleans -- the sleazy good times capital of America -- and quadruple it, and you have a hint of what's inside these sticky pages." Bill Tonelli, Author of The Italian American Reader and Editor for Esquire and Rolling Stone.

MATTHEW RANDAZZO V was born and raised in New Orleans. He is an investigative journalist and popular historian who seeks to discover extraordinary untold stories from America's underworld. He is also the author of four books, has written for the New York Daily News, and has appeared as an authority on the American underworld on E! Entertainment Television and over 100 radio programs around the world. More information can be found at www.MRVBooks.com. FRENCHY BROUILLETTE has been the reigning Mr. New Orleans for over fifty years. With a record that includes over three dozen felony arrests, multiple gunshot wounds, and a 1,600-page FBI file, Frenchy is the most notorious Cajun gangster in the history of Louisiana and certainly one of the most colorful figures in the history of the Mob. Known as "The Keith Richards of the American Mafia," Frenchy was often a fugitive from justice during the writing of Mr. New Orleans.