Ferrari: Stories from Those Who Lived the Legend (Hardcover) 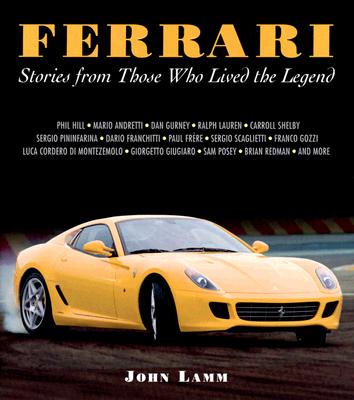 No other cars embody automotive passion better than those produced by Ferrari. From the record-setting Formula One race cars produced by Scuderia Ferrari to the exquisite road cars created in Maranello, Italy, Ferrari has produced some of the most sensuous vehicles ever created.

Exquisitely illustrated, Ferrari: Stories from Those Who Lived the Legend tells the complete story of a car like no other. Sixty years after Ferrari blazed onto the scene, this big book takes us back to the world where the car was created. Master photographer and automotive writer John Lamm tells the Ferrari story through the words of the people who made the history. In extensive interviews with those who lived the story of Ferrari, from its founding days right up to our own, Lamm gives us a thrilling, behind-the-scenes look at how automotive history was made. Virtually an oral history of the world's most iconic sports car, Ferrari: Stories from Those Who Lived the Legend is also a treasury of historic and detailed modern images--what any reader lucky enough to open it up might expect--a hell of a ride.

As a respected automotive journalist and photographer covering high-performance cars for Road & Track since 1975, author and photographer John Lamm has worked with and interviewed nearly every significant figure in Ferrari history. Lamm’s work has won numerous awards including the International Motor Press Association’s Ken Purdy award and the Motor Press Guild’s Dean Batchelor prize. This is his 11th book. Lamm lives in San Clemente, California, with his wife Scheri.

“A thrilling, behind-the-scenes look at how automotive history was made.”

“A superb coffee table book whose excellent photography, graphics and layout make it fascinating to flip through. The text gives a deep insight into the life and complex personality of Enzo Ferrari. Learn how Ferrari evolved from his early days as a race-car driver to becoming the creator of some of the most beautiful and successful sports and racing cars ever made. This is a must-have for Ferrari fans!”

“Definitely one to add to your coffee table!”

“A great new ‘coffee table’ book for those of us who never get tired of looking at great photography.”

“A couple of AutoWeek friends have new books out just in time for the holidays. We’d be glad to see either of these coffee-table tomes under the tree.”