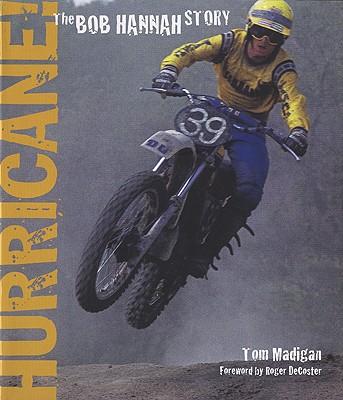 By Roger DeCoster (Foreword by), Tom Madigan
Email or call for price (info@riverbendbookshop.com)
Hard to Find

Hurricane! The Bob Hannah Story is the first book to explore the life of American motocross and Supercross racing’s first superstar. From the time he raced the Husquvarna he bought with “ones, fives, tens, change; all of my savings,” until his retirement at Unadilla in 1989, Bob Hannah won races and championships, spoke his mind, and signed almost every autograph-seeker’s program. Told as an oral history by Hannah himself and by those who know him best, this book is full of stories that could only have happened to a character as colorful as the Hurricane.

The tale author Tom Madigan tells is the life of an American original, a boy who went from riding dirt bikes in the desert with his father to taking the motocross world by surprise. By the time Hannah retired in 1989, he had collected 70 AMA National wins, seven AMA National titles, a MX des Nations title, and legions of devoted fans. When inducted into the AMA Motorcycle Hall of Fame in 1999, he was second to none in both total and consecutive wins. Richly illustrated, this is the definitive biography of the Hurricane.

“Bob Hannah fans who rejoiced at the excellent episode of The Motorcross Files dedicated to him won’t want to miss this book. Hurricane! chronicles the life and times of one of the greatest American motocross heroes of all time, with explicit detail and excellent photography. It’s clear that the author has a close relationship with the subject, and that appears to have resulted in unparallel access to the reclusive Hannah’s life story.” – Bryan Stealey, Racer X Illustrated

“Hurricane! The Bob Hannah Story blew me away. Tom Madigan’s approach to telling Hannah’s story is unique and quite effective. Instead of relying on just his own research, Madigan calls upon many of Hannah’s friends, foes and fellow competitors to help pen the tale. He then goes to “the horse’s mouth” and has Hannah himself fill in the blanks. The 176 page hardcover book contains over 200 color and black and white photographs with informative captions that propel the story. Hurricane, The Bob Hannah Story rates four out of five lug nuts. What a treasure to pass some time with in the off-season.” – Gregg Leary, SpeedTV.com

“This new, 178-page book written by Tom Madigan explores Hanna’s life through Hurricane’s own words and the words of those who knew him. The collection of personal photos alone is worth the $35 cover price.” - American Motorcyclist

“It has more than 200 photos and is packed with recollections form Hannah’s friends, family and fellow competitors. Legend Roger DeCoster wrote the foreword for what is probably the definitive biography of “Hurricane Hannah.” - Cycle News