The Art of Ducati (Hardcover) 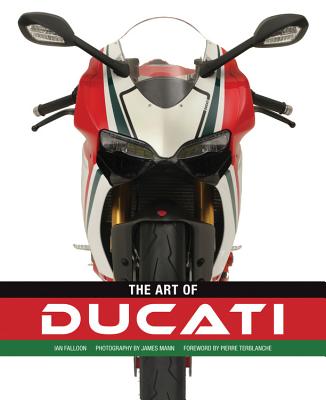 By Ian Falloon, James Mann (By (photographer))
Email or call for price

Celebrate more than 60 years of Italian motorcycle mastery. Over 60 years ago in Bologna, Italy, a small company called Ducati began manufacturing simple, inexpensive 50cc motorcycles--really no more than two-stroke-powered bicycles. Since then, Ducati has evolved into one of the most storied names in the motorcycling world, its lineup of beautiful machines revered for their technical excellence and extreme performance. In The Art of Ducati, Ducati expert Ian Falloon teams with renowned British photographer James Mann to present a gorgeously illustrated, wonderfully curated review of more than six decades of Ducati excitement. From the single-cylinder bikes of the 1950s and 1960s to the bevel-drive twins of the 1970s and early 1980s to the high-performance bikes of the 21st century, The Art of Ducati showcases a motorcycle marque that has never rested on its laurels. Ducati's style and technology have constantly evolved, engineering timeless classics like the 900SS, Darmah, Mike Hailwood Replica, 851, 916, Monster, and ST sports touring series, bikes that laid the foundation for today's cutting-edge models: the Panigale superbike, Multistrada adventure bike, all-new Monster, Hypermotard, and Diavel power cruiser. While there's no end in sight for Ducati's dominance, The Art of Ducati pays homage to their past six-plus decades of masterful motorcycle engineering.

Ian Falloon was born in New Zealand and studied engineering and music at Victoria University, Wellington. After a motorcycle accident brought an end to his career as a symphony orchestra oboist, he began writing articles about motorcycles for magazines including Classic Bike, Cycle World, Motorcyclist, Two Wheels, Motorcycle Sport, and Australian Motorcycle News. His first book, The Ducati Story, has run to several editions and has been published in three languages. The success of The Ducati Story led to a series of Ducati books and histories of Honda, Kawasaki, BMW, and Moto Guzzi motorcycles including Motorbooks titles The Complete Book of Ducati, The Complete Book of Moto Guzzi, The Complete Book of Triumph Motorcycles, and The Art of Ducati. With an interest and passion spanning decades, Ian now concentrates on collecting and restoring older Italian motorcycles, particularly Ducati, MV Agusta, Laverda, and Moto Guzzi. He lives in Melbourne, Australia, and is ably supported in his projects by his family.

James Mann is a leading professional car and motorcycle photographer, with more than 30 years of experience shooting for publications, the motor industry, and businesses around the world. His work has appeared within and on the covers of more than 70 books and James has provided stunning visuals for numerous magazines, including Classic and Sports Car, CAR, Forza, The Sunday Times, and Automobile magazine. His Motorbooks titles include Art of the Formula 1 Race Car, The Art of the Classic Sports Car, Lamborghini Supercars, Art of Ducati, and Art of the Le Mans Race Car. He was recently awarded a Fellowship of the Royal Photographic Society. James resides in Dorset, UK.

"Ian Falloon and James Mann's The Art of Ducati (Motorbooks) is a masterwork of Italian motorcycle history." - Vanity Fair

'detail and insight you will not find elsewhere... A wonderful book to sit and flick through while planing your fantasy garage.'