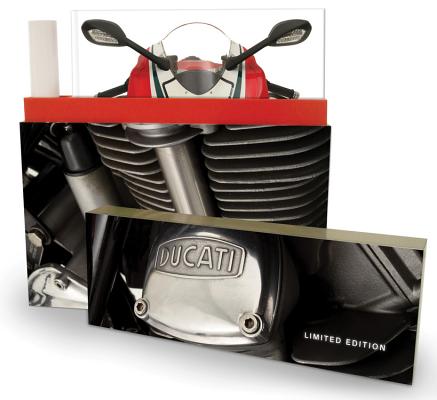 By Ian Falloon, James Mann (Photographs by)
$100.00
Email or call for price

Celebrate more than 60 years of Italian motorcycle mastery. Over 60 years ago in Bologna, Italy, a small company called Ducati began manufacturing simple, inexpensive 50cc motorcycles--really no more than two-stroke-powered bicycles. Since then, Ducati has evolved into one of the most storied names in the motorcycling world, its lineup of beautiful machines revered for their technical excellence and extreme performance. In The Art of Ducati, Ducati expert Ian Falloon teams with renowned British photographer James Mann to present a gorgeously illustrated, wonderfully curated review of more than six decades of Ducati excitement. From the single-cylinder bikes of the 1950s and 1960s to the bevel-drive twins of the 1970s and early 1980s to the high-performance bikes of the 21st century, The Art of Ducati showcases a motorcycle marque that has never rested on its laurels. Ducati's style and technology have constantly evolved, engineering timeless classics like the 900SS, Darmah, Mike Hailwood Replica, 851, 916, Monster, and ST sports touring series, bikes that laid the foundation for today's cutting-edge models: the Panigale superbike, Multistrada adventure bike, all-new Monster, Hypermotard, and Diavel power cruiser. While there's no end in sight for Ducati's dominance, The Art of Ducati pays homage to their past six-plus decades of masterful motorcycle engineering.

One of the world’s foremost motorcycle historians, Ian Falloon is the author of more than forty books on motorcycles. His titles include The Ducati 750 Bible, Ducati 900 Bible, The Moto Guzzi Story, Honda Story, Kawasaki Story, BMW Story, The Book of MV Agusta Fours, Moto Guzzi Sport Bible and Laverda Twin and Triple Bible. He has a small collection of classic sporting motorcycles, including a 1974 Ducati 750 Super Sport that he has owned since 1976. A contributor to a number of motorcycle magazines around the world, Ian Falloon was born in New Zealand but currently lives in Australia with his wife Miriam, and sons Ben and Tim.

James Mann is one of the world's leading car and motorcycle photographers, with more than 20 years of experience shooting for enthusiast publications, the motor industry, and businesses around the world. His work has appeared within and on the covers of more than 50 books and has provided stunning visuals for numerous magazines, including Classic and Sports Car, CAR magazine, Forza, The Sunday Times, and Automobile magazine as well as being chosen to photograph the British Auto Legends stamps for the Royal Mail. His advertising clients include Aston Martin, BMW, and Toyota, among others. Visit his website at www.jamesmann.com

"Ian Falloon and James Mann's The Art of Ducati (Motorbooks) is a masterwork of Italian motorcycle history." - Vanity Fair

'detail and insight you will not find elsewhere... A wonderful book to sit and flick through while planing your fantasy garage.'ÿ