The Night Stalker: The Disturbing Life and Chilling Crimes of Richard Ramirez (Paperback) 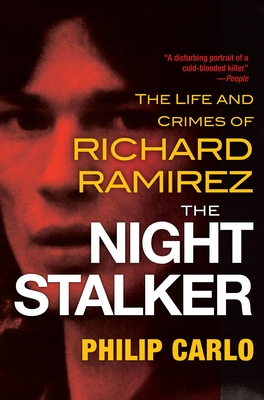 “An astonishing portrait of a killer not seen since In Cold Blood.”
—New York Daily News

A bestselling masterpiece of true crime on par with Helter Skelter, this definitive account of one of America’s most feared and notorious serial killers takes you deep into the psychology of a murderer, his terrifying crimes, and the cult following that is shockingly revealed in this revised and updated edition of a true crime classic.

Decades after Richard Ramirez left thirteen dead and paralyzed the city of Los Angeles in the 1980s, his name is still synonymous with fear, torture, and sadistic murder. Philip Carlo’s classic The Night Stalker, based on years of meticulous research and extensive interviews with Ramirez, revealed the killer and his horrifying crimes to be even more chilling than anyone could have imagined. From watching his cousin commit murder at age eleven to his nineteen death sentences to the juror who fell in love with him, the story of Ramirez is a bizarre and spellbinding descent into the very heart of human evil.

After The Night Stalker was first published, thousands of women from all over the world contacted Carlo, begging to be put in touch with the killer. Carlo interviewed them and presents their disturbing stories in this updated edition along with an exclusive death row interview where the killer himself gives his thoughts on the “Ramirez Groupies”—and what he thinks they really want.

Philip Carlo was born and raised in Bensonhurst, Brooklyn. His research for The Night Stalker included spending over 100 hours with Richard Ramirez at San Quentin’s Death Row. The photo above was taken on the day of Ramirez’s wedding on Death Row. He also wrote the true-crime bestsellers The Ice Man, The Butcher, and Gaspipe.

Praise for THE NIGHT STALKER:

"Phil Carlo paints a disturbing portrait of cold-blooded killer Richard Ramirez. In the true crime tradition of In Cold Blood and The Executioner's Song, Carlo compelling tells the ghastly story from numerous points of view, including those of Ramirez and two ingenious sheriff's detectives who finally cracked the case."
—PEOPLE Magazine

"The chilling inside perspective of a serial killer."
—Library Journal

"Carlo has given us an astonishing portrait of a killer not seen since In Cold Blood."
—NY Daily News

"We've all read novelists and true crime writers who try to put you inside-the-mind-of-the-serial-killer, but I can't remember one that succeeded with the physical and psychological intimacy of this collaboration between the writer and the killer himself."
—New York Press

"This is the definitive book on America's most feared serial killer. The writing is so intimate, you actually feel like a voyeur reading this book. A must read that will return you to the time when no one could sleep in Los Angeles because of the Stalker. A real page turner."
—Tony Valdez, Fox TV Los Angeles

"A true crime masterpiece. Carlo vividly brings to life one of this century's most brutal kinds of predator. A must read!"
—Steve Elshoff, Producer, American Justice