Midnight in Vehicle City: General Motors, Flint, and the Strike That Created the Middle Class (Hardcover) 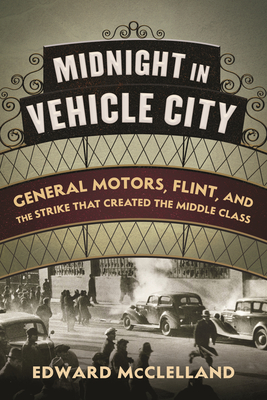 In a time of great inequality and a gutted middle class, the dramatic story of “the strike heard around the world” is a testament to what workers can gain when they stand up for their rights.

The tumultuous Flint sit-down strike of 1936-1937 was the birth of the United Auto Workers, which set the standard for wages in every industry. Midnight in Vehicle City tells the gripping story of how workers defeated General Motors, the largest industrial corporation in the world. Their victory ushered in the golden age of the American middle class and created a new kind of America, one in which every worker had a right to a share of the company’s wealth. The causes for which the strikers sat down—collective bargaining, secure retirement, better wages—enjoyed a half century of success. But now, the middle class is disappearing and economic inequality is at its highest since before the New Deal.

Journalist and historian Edward McClelland brings the action-packed events of the strike back to life—through the voices of those who lived it. In vivid play-by-plays, McClelland narrates the dramatic scenes including of the takeovers of GM plants; violent showdowns between picketers and the police; Michigan governor Frank Murphy’s activation of the National Guard; the actions of the militaristic Women’s Emergency Brigade who carried billy clubs and vowed to protect strikers from police; and tense negotiations between labor leader John L. Lewis, GM chairman Alfred P. Sloan, and labor secretary Frances Perkins.

The epic tale of the strike and its lasting legacy shows why the middle class is one of the greatest inventions of the 20th century and will guide our understanding of what we will lose if we don’t revive it.

Edward McClelland is a journalist, a historian, and an author born and raised in Lansing, Michigan. His work has been published in numerous places, including the New York Times, Washington Post, and the Chicago Reader, and on Salon and Slate. He is the author of several books, including Young Mr. Obama: Chicago and the Making of a Black President, Nothin’ but Blue Skies: The Heyday, Hard Times and Hopes of America’s Industrial Heartland, and How to Speak Midwestern. Connect with him online at edwardmcclelland.com and @TedMcClelland on Twitter.

“[A] fascinating labor struggle. Readers interested in American labor and social history will find McClelland’s engagingly written, informative work a key to understanding the voices and roles of those who advocated for better working conditions for all working-class people.”
—Booklist

“Students of labor history will relish this enthusiastic chronicle of a victory for ordinary workers.”
—Publishers Weekly

“In Midnight in Vehicle City, Edward McClelland draws out such lessons from the past and offers them up to workers fighting new battles in long conflict.”
—Chicago Review of Books

“[McClelland’s] chronicle of the strike is compelling.”
—The Wall Street Journal

“McClelland writes with grace and insight about one of the most consequential, world-shaking labor strikes of all time. What a gift! Midnight in Vehicle City gives us both precision and power in the telling of an astonishing story with so much to teach those of us today who are wrestling with inequality and exploitation in the twenty-first century.”
—Anna Clark, author of The Poisoned City: Flint’s Water and the American Urban Tragedy

“Midnight in Vehicle City captures the Flint of today through the captivating story of the city’s past. McClelland reveals the toughness, determination, and even recklessness that fueled autoworkers and their families in 1936 as they took on a corporate giant, the military, and an unsympathetic press. If you ever wonder why current Flint residents haven’t given up, this book is an engaging reminder that fighting seemingly unwinnable battles is part of the city’s DNA.”
—Gordon Young, author of Teardown: Memoir of a Vanishing City

“Lively and dramatic . . . from the shop floor to kitchen tables to furtively organized midnight meetings, McClelland paints wonderfully resonant portraits of individual workers . . . a book not just for students but also Walmart clerks, Amazon warehouse workers, and McDonald’s ‘associates,’ who will be inspired as they make their own history.”
—Nelson Lichtenstein, author of State of the Union: A Century of American Labor

“McClelland’s lively and lucid narrative of this central event in labor history is a timely reminder that when workers act together they can bring about significant change—not just for themselves but for society at large.”
—Timothy Noah, author of The Great Divergence: America’s Growing Inequality Crisis and What We Can Do About It

“The battles were fought bitterly, often viciously, with rocks and bottles, blackjacks and hammers, against the brick-and-soot backdrop of America’s industrial cities in the 1930s. The war was for the dignity of the American worker; the tactic was the strike. . . . A vivid, granular drama rich with characters, scenes, and the soulful gravity of the worker’s fight for decency.”
—David Giffels, author of Barnstorming Ohio: To Understand America