One Family's Response to Terrorism: A Daughter's Memoir (Paperback) 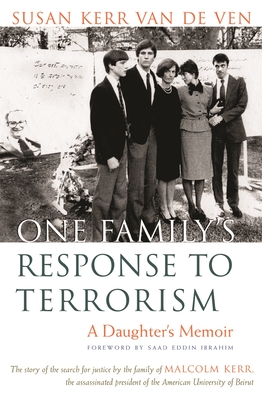 On January 18, 1984, Malcolm Kerr, president of the American University of Beirut and a respected scholar of Middle East politics, was shot in the back of the head as he stepped out of an elevator on his way to work. At the time, the chaos of Lebanon's civil war made it impossible to investigate who had carried out the killing and why.

Seventeen years later, armed with new information concerning the assassination and supported by the Anti-Terrorism Act passed by Congress in 1996, his family came to a painful consensus that nonviolent justice through the rule of law was a duty they could not ignore. Disturbing revelations emerged as the author explored U.S. government intelligence, U.S. district court records, Malcolm Kerr's unpublished papers, and the recollections of journalists, diplomats, academics, and former Hizballah hostages who lived through the violence of 1980s Lebanon. The family's team of lawyers built a clear case against the Islamic Republic of Iran, culminating in a trial before a judge of the U.S. District Court. One Family's Response to Terrorism: A Daughter's Memoir is a stunning portrait of the intimate way in which violence pulls lives apart, of an American family caught on the stage of Middle East politics, and of the moral choices required in seeking justice.

Susan Kerr van de ven was born in 1958 at the American University Hospital in Beirut, Lebanon. As a child she livedin the United States, Egypt, Lebanon, France, England, and Tunisia. She earned a master's degree in Middle Eastern studies and a doctorate in education from Harvard University. She lives in Cambridge, England, where she runs a creative writing program for primary school children and serves as an elected Liberal Democrat councillor on South Cambridgeshire District Council.