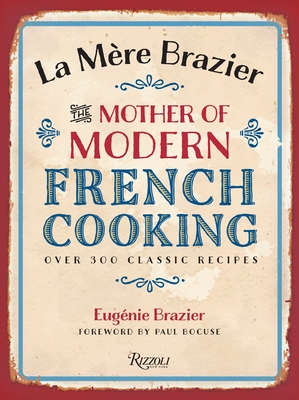 Available in English for the first time, this charming book combines over 300 classic regional French recipes from Lyon, the hotbed of the French culinary scene, with reminiscences by one of the only female chefs to have won six Michelin stars. La Mère Brazier became the most famous restaurant in France—a magical gastronomic experience that drew such stars as Marlene Dietrich as well as French presidents. Its proprietor and chef, Eugénie Brazier, was the first woman awarded six Michelin stars. She became—and still is today—the inspiration and mentor for modern French cooking, and leading chefs including Paul Bocuse have trained with her. Written in her words and first published in 1977, La Mère Brazier is a culinary masterpiece. Part memoir and part recipe collection, it is translated into English here for the first time. This is a master class in how to cook, with over 300 recipes—from Bresse chicken in mourning (with truffles) to lobster Aurora as well as simple classics like artichokes with foie gras—that anyone can easily follow at home. While most classic French recipes are complicated and time-consuming, Brazier’s cooking is more practical and user-friendly. This book features anecdotal culinary wisdom and charming trivia (Bocuse had to iron tablecloths and wash dishes before moving up to prepping). Filling an important gap in culinary history, this book is a must-have for anyone interested in classic recipes and French regional cuisine.

Eugénie Brazier is the mother of modern French cooking. She opened her restaurant in 1921 and went on to earn six Michelin stars—the only woman to do so until 2009. Among the chefs that trained with her were Paul Bocuse and Bernard Pacaud of L’Ambroisie in Paris, both three-star Michelin icons. Paul Bocuse holds three Michelin stars and is renowned as one of the world’s preeminent chefs.

"...extraordinary...La Mere Brazier brings the life, voice and recipes of an iconic French chef to an Anglophone audience at long last. Care has been taken to retain the historical accuracy of the recipes while making them accessible to modern home cooks." -Saveur