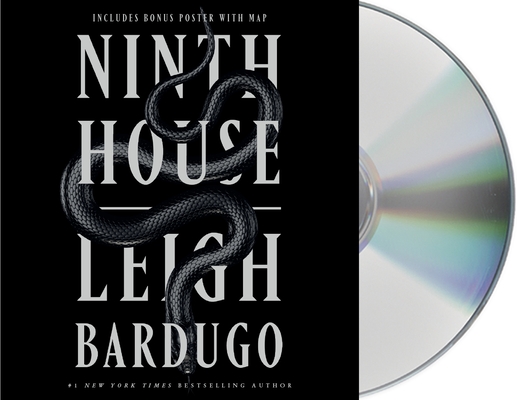 “Queen Leigh’s first foray into adult fantasy is a sensational success! One of the best fantasy books I’ve read in a long while, Ninth House contains Yale secret societies, ghosts, magic, morally gray characters, and murder. Bardugo balances dual timelines with intricate precision, and the history and world-building of her fantastical New Haven is superb. I couldn’t put this book down; I had to know what was going to happen next. I savored every moment reading this novel, and I am jealous of readers who get to experience it for the first time!”
— Isabella Ogbolumani, Page 1 Books, Evanston, IL

“This stunning book in the tradition of The Secret History and The Magicians is about a girl who can see ghosts, and who gets a full scholarship to Yale in the aftermath of a horrible tragedy. Bardugo’s first adult entry has a cast of characters you won’t soon forget, and great social commentary about class. Great for fans of her other work who have aged up, or fans of gritty adult fantasy.”
— Vickie Roberts, Andover Bookstore, Andover, MA

This program includes a bonus conversation with the author.

Galaxy “Alex” Stern is the most unlikely member of Yale’s freshman class. Raised in the Los Angeles hinterlands by a hippie mom, Alex dropped out of school early and into a world of shady drug-dealer boyfriends, dead-end jobs, and much, much worse. In fact, by age twenty, she is the sole survivor of a horrific, unsolved multiple homicide. Some might say she’s thrown her life away. But at her hospital bed, Alex is offered a second chance: to attend one of the world’s most prestigious universities on a full ride. What’s the catch, and why her?

Still searching for answers, Alex arrives in New Haven tasked by her mysterious benefactors with monitoring the activities of Yale’s secret societies. Their eight windowless “tombs” are the well-known haunts of the rich and powerful, from high-ranking politicos to Wall Street’s biggest players. But their occult activities are more sinister and more extraordinary than any paranoid imagination might conceive. They tamper with forbidden magic. They raise the dead. And, sometimes, they prey on the living.

Ninth House is the long-awaited adult debut by the beloved author of Shadow and Bone and Six of Crows. Leigh Bardugo will take her place alongside Lev Grossman and Deborah Harkness as one of the finest practitioners of literary fantasy writing today.

"Ninth House is the best fantasy novel I’ve read in years, because it’s about real people. Bardugo’s imaginative reach is brilliant, and this story—full of shocks and twists—is impossible to put down." - Stephen King

"Ninth House is one of the best fantasy novels I’ve read in years. This book is brilliant, funny, raw and utterly magnificent — it's a portal to a world you’ll never want to leave." - Lev Grossman, New York Timesbestselling author of The Magicians

"In this mesmerizing novel, Leigh Bardugo introduces us to Alex, a high-school dropout who gets a free ride to Yale because of a unique talent. Bardugo's New Haven is plausible and frightening, and I was one rapt reader." - Charlaine Harris, bestselling author of the True Blood series

Leigh Bardugo is the New York Times-bestselling author of Ninth House and the creator of the Grishaverse, which spans the Shadow and Bone trilogy (now a Netflix original series), the Six of Crows duology, the King of Scars duology, The Language of Thorns, and The Lives of Saints--with more to come. Her short stories can be found in multiple anthologies, including The Best American Science Fiction and Fantasy. Leigh grew up in Southern California and graduated from Yale University. These days she lives and writes in Los Angeles.

"Ninth House is the best fantasy novel I’ve read in years, because it’s about real people. Bardugo’s imaginative reach is brilliant, and this story—full of shocks and twists—is impossible to put down." - Stephen King

"Ninth House is one of the best fantasy novels I’ve read in years. This book is brilliant, funny, raw and utterly magnificent — it's a portal to a world you’ll never want to leave." - Lev Grossman, New York Times bestselling author of The Magicians

"Ninth House is the best thing I’ve read in a long time. There’s so much magic here that you'll begin to feel it seeping into the room around you as you read, and characters so real you ’ll practically hear their voices in your ear. Leigh Bardugo has written a book so delicious, so twisty, and so immersive I wouldn’t blame you for taking the day off to finish it." - Kelly Link, author of Magic for Beginners and Get in Trouble.

"Leigh Bardugo's Ninth House rocked my world. I could not get enough of sinewy, ghost-haunted Alex Stern, a heroine for the ages. With a bruised heart and bleeding knuckles, she risks death and damnation — again and again — for the people she cares about. I was cheering her on the whole way: from the first brilliant sentence of this book to the last. More, please, Ms. Bardugo." - Joe Hill, New York Times bestselling author of NOS4A2

"In this mesmerizing novel, Leigh Bardugo introduces us to Alex, a high-school dropout who gets a free ride to Yale because of a unique talent. Bardugo's New Haven is plausible and frightening, and I was one rapt reader." - Charlaine Harris, bestselling author of the True Blood series

"Genuinely terrific....The worldbuilding is rock solid, the plot is propulsive, and readers will be clamoring for a sequel as soon as they read the last page." - Library Journal (starred review)