Doggo and Pupper Save the World (Hardcover) 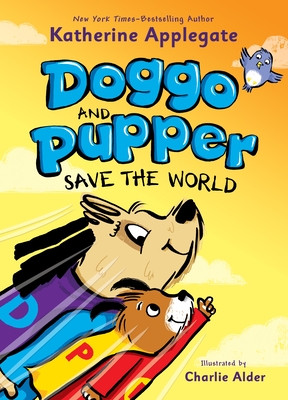 This is book number 2 in the Doggo and Pupper series.

Life is good for Pupper, too, even though he worries a lot, about things like giant squirrels. If he were braver, he might even be a hero. Maybe even a hero who can fly! But heroes aren’t afraid of giant squirrels . . .

Doggo and Pupper Save the World continues the joyful new series by beloved author Katherine Applegate, with illustrations by Charlie Alder.

Katherine Applegate is the author of several best-selling young adult series, including Animorphs and Roscoe Riley Rules. Home of the Brave, her first standalone novel, received the SCBWI 2008 Golden Kite Award for Best Fiction and the Bank Street 2008 Josette Frank Award. She lives with her family in Irvine, California.

Charlie Alder has been illustrating for over seven years, including Chicken Break written by Cate Berry. She is particularly well-known for her young and tween girl book cover design and illustrations. Before that, she was Art Director for a popular women's weekly magazine. Some of Charlie's publishing clients include American Girl, Egmont, Hachette, Hinkler, Macmillan, Penguin, Random House, and Scholastic. She lives in England with her family.


Praise for Doggo and Pupper: