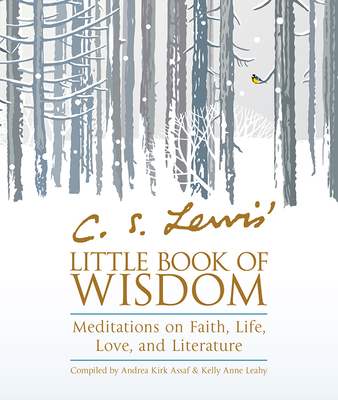 A USA Today bestseller!
"These well-chosen Lewis quotes will inspire readers and prompt them to make their own spiritual reflections." —Publishers Weekly

Novelist, poet, critic, lay theologian, and best-selling author of the 'Narnia' series, C. S. Lewis' works have become timeless classics for adults and children around the world.
Here in one concise volume is the essence of his thought on subjects ranging from love and faith to ethics and morality and myth and literature that will throw open the windows of the soul and provide readers with bite-sized nuggets of wisdom and inspiration from one of the best-loved writers of the 20th century.

This lovely little gift book will provide sustenance, wisdom, and hope for both believers and seekers. And, most importantly, it will provide an entry point for those unfamiliar with Lewis that will make them want to explore his fiction and nonfiction works.

Selections from C.S. Lewis' Little Book of Wisdom:
"If God had granted all the silly prayers I've made in my life, where should I be now?"
"Surely arrested development consists not in refusing to lose old things, but in failing to add new things…"
"Do not dare not to dare."
"We are mirrors whose brightness is wholly derived from the sun that shines upon us."
"I didn't go to religion to make me happy. I always knew a bottle of Port would do that. If you want a religion to make you feel really comfortable, I certainly don't recommend Christianity."

C. S. Lewis (November 29, 1898-November 22, 1963) was a British novelist, poet, academic, medievalist, literary critic, essayist, lay theologian, broadcaster, lecturer, and Christian apologist. He held academic positions at both Oxford University (Magdalen College, 1925-1954) and Cambridge University (Magdalene College, 1954-1963). He is best known for his works of fiction, especially The Screwtape Letters, The Chronicles of Narnia, and The Space Trilogy, and for his nonfiction Christian apologetics, such as Mere Christianity, Miracles, and The Problem of Pain.
Andrea Kirk Assaf is an editor, journalist, and translator who divides her time between Rome and Michigan.

"This charming volume of quotes from C.S. Lewis's works includes his Christian apologia (Mere Christianity, The Screwtape Letters, Surprised by Joy) and his fiction (The Chronicles of Narnia, "The Space Trilogy"). Editors Assaf and Leahy have selected brief quotations and placed them in thematic groupings relevant to modern Christians, such as "Living a Full Life with Christ" and "Recognizing Sin." Quotes are mainly short but pack punches: "Gratitude looks to the past and love to the present; fear, avarice, lust, and ambition look ahead"; "As image and apprehension are in organic unity, so, for a Christian, are human body and human soul." A complete Lewis bibliography is included for those interested in following up on works quoted. Also provided are several blank pages at the end of the volume for readers to jot their own thoughts. These well-chosen Lewis quotes will inspire readers and prompt them to make their own spiritual reflections." --Publishers Weekly, (Sept. 2018)
— Reviews