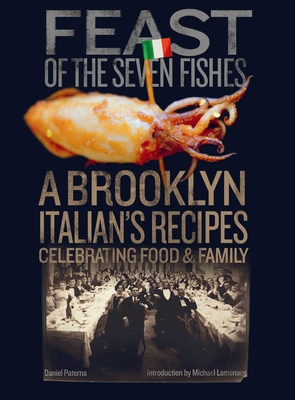 Daniel Paterna's Feast of the Seven Fishes: A Brooklyn-Italian's Recipes Celebrating Food and Family is a timely reminder that a shared memory of food draws upon and enriches our souls.

In Feast of the Seven Fishes: A Brooklyn Italian's Recipes Celebrating Food and Family, Daniel Paterna takes you on magical journey into a hidden world. Through recipes handed down in his family, stunning photos taken by the author himself, and three-generations of memories, Paterna reveals the soulful, humorous, and always delicious history of Italian-Americans in Brooklyn.

Paterna is the real deal, a second-generation Italian-American, whose family has preserved their culture from the shores of Naples to the streets of Bensonhurst. He'll show you how to make long-forgotten recipes like stuffed calamari and he'll take you to the stores, restaurants, and bakeries where artisans are still doing things the old way.

This is an intensely personal book that powerfully illustrates the essence of the American experience: the ways food, family, and memory are preserved and changed by the immigrants who brought them to our shores, and the children of those immigrants who keepthe flame alive.

Daniel Paterna has created some of television's most recognizable images; during his career, he has worked with leading content brands including ABC News, AMC, A&E, Disney, ESPN, History, and PBS, earning awards from such institutions as PRINT, Communication Arts, and Promax/International Broadcast Design Association. His design for NBC's coverage of the 1996 Olympics won him an Emmy from The National Academy of Television Arts & Sciences. Paterna was born and raised in the house his grandfather built in Brooklyn, graduated from The Pratt Institute with honors in graphic design, and currently heads his own Brooklyn-based design group. His photography has been on display at the Museum of Modern Art, New York, and the 440 Gallery in Brooklyn. A native New Yorker, Chef Michael Lomonaco has spent his career celebrating the bounty of the American table at some of the city's most iconic restaurants including 21, Windows on the World, Wild Blue, and Guastavino's, before opening Porter House in 2006. Lomonaco is also one of the original Food Network and Travel Channel chef personalities with his shows Michael's Place and Epicurious. Fans can still catch him on TV today, as he makes regular appearances on ABC's The Chew, and The Today Show, among others. Along with Porter House Bar and Grill, Michael is the chef and partner of Center Bar, the sophisticated cocktail lounge also located on the 4th floor of the Time Warner Center. John Turturro is an actor and director whose notable film credits include Do the Right Thing,Barton Fink, Quiz Show, The Big Lebowski, The Truce, O Brother, Where Art Thou?, and Mia Madre. He is the director of six films, including Mac, which was honored with the Camera d'Or at the 1992 Cannes Film Festival, and the upcoming Going Places. On stage, he has appeared in Danny and the Deep Blue Sea, for which has was awarded an OBIE, and Italian-American Reconciliation, La Puta Vida, The Bald Soprano, Steel on Steel, The Resistible Rise of Arturo Ui, and End Game. Turturro is also known for his television roles on Monk, for which he won an Emmy, and most recently HBO's The Night Of, for which he was nominated for a Golden Globe and a SAG award.

"This distinctive blend of memoir and cookbook is nostalgia catnip for Italian-Americans."
— Publishers Weekly

"This is a book to be cherished. It may be a love letter to Brooklyn, but every reader will be wrapped in the warmth that rises from each and every page."
— Italian Tribune

"Feast of the Seven Fishes is a mouthwatering trip through south-Brooklyn's Italian kitchens."
— Brooklyn Book Beat

"You'll want to sip prosecco and nibble on antipasti to savor this visual love letter to family, Brooklyn and Italy."
— Ambassador Magazine

Feast of the Seven Fishes is a great pick for those looking for Italian-American recipes and stories of the people behind the food."
— Tara's Multicultural Table

"This is not your traditional cookbook. This is a story about the importance of family and community told through pictures and recipes. Would I recommend this book? Yes, a thousand percent!"
— She Loves Biscotti

"Feast of the Seven Fishes is a delightful tome. It will be appreciated by American readers but equally by overseas booklovers, who will consider this not only a cookbook but also something of a travelogue."
— Mostly Food & Travel Journal

"The book is much more than just recipes for the traditional Christmas Eve dinner of the Seven Fishes. It is a wonderful documentary on his family and the shops and vendors he grew up with. A true celebration."
— Divina Cucina

One of Chowhound's "Best New Regional & Cultural Cookbooks for Fall 2019"

"It’s not just a cookbook: It’s as much a memoir and visual history of a changing neighborhood as a series of recipes and kitchen tips. Paterna revels in the sights (he also shot the beautiful images in the book) and smells of an Italian kitchen, passing along anecdotes and personal memories."
— Craig Hubert

“I tried to cook a lot of what my mom cooked. I realized that many of the recipes were not documented, although she was the only family member that did, but they were not documented to the point of translating handfuls to a measurement.”
— Andrew Cotto