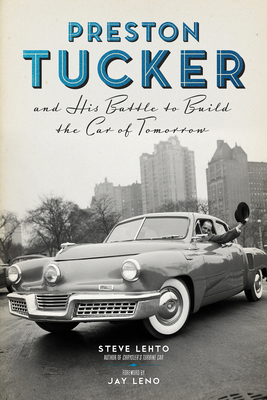 By Steve Lehto, Jay Leno (Foreword by)
$27.99
Please contact us for more details

After World War II, the American automobile industry was reeling. Having spent years building tanks and airplanes for the army, the car companies would need years more to retool their production to meet the demands of the American public, for whom they had not made any cars since 1942.

And then in stepped Preston Tucker. This salesman extraordinaire from Ypsilanti, Michigan, had built race cars before the war, and had designed prototypes for the military during it. Now, gathering a group of brilliant automotive designers, engineers, and promoters, he announced the creation of a revolutionary new car: the Tucker '48, the first car in almost a decade to be built fresh from the ground up. Tucker's car would include ingenious advances in design and engineering that other car companies could not match. With a rear engine, rear-wheel drive, a safety-glass windshielf that would pop out in case of an accident, a padded dashboard, independent suspension, and automatic transmission, it would be more attractive and aerodynamic—and safer—than any other car on the road.

But as the public eagerly awaited Tucker's car of tomorrow, powerful forces in Washington were trying to bring him down. An SEC commissioner with close ties to Detroit's Big Three automakers deliberately leaked information about an investigation the agency was conducting, suggesting that Tucker was bilking investors with a massive fraud scheme. Headlines accused him a perpetrating a hoax and claimed that his cars weren't real and his factory was a sham.

In fact, the Tucker '48 sedan was genuine, and everyone who saw it was impressed by what this upstart carmaker had achieved. But the SEC's investigation had compounded the company's financial problems and management conflicts, and a superior product was not enough to keep Tucker's dream afloat.

Here, Steve Lehto tackles the story of Tucker's amazing rise and tragic fall, relying on a huge trove of documents that has been used by no other writer to date. It is the first comprehensive, authoritative account of Tucker's magnificent car and his battles with the government. And in this book, Lehto finally answers the questions automobile aficionados have wondered about for decades: Exactly how and why was the production of such an innovative car killed?

Steve Lehto is the author of Chrysler’s Turbine Car, Death’s Door, Drawn to Injustice, and The Great American Jet Pack, among others. His articles have been published by the Huffington Post, Michigan History, and other publications. Lehto is also a weekly columnist at RoadandTrack.com. Jay Leno was the long-time host of the Tonight Show. His extensive collection of classic cars is world famous.

“Car enthusiasts of every stripe—including Jay Leno, who was inspired to provide a thoughtful introduction—will appreciate Lehto’s meticulous research, which re-creates a lost era and cogently and accurately presents the full dramatic story of one of the auto industry’s seminal innovators.” —Booklist

“This is not just a book for automobile buffs; there’s enough insight and intrigue to appeal to a wider audience.” —Chicago Review of Books

“A deeply researched and highly approachable new biography written by Steve Lehto (with a forward by Jay Leno), Preston Tucker and His Battle to Build the Car of Tomorrow, describes the mad, madcap, and often maddening efforts Preston Tucker undertook in his attempt to create real and practical change within the American automotive industry.” —TheDrive.com

"An exceptional and truly impressive study based upon painstaking research and presented in a thoroughly 'reader friendly' style in tone, commentary, content, organization and presentation..." —Midwest Book Review

“…does a fine job of telling the full story of this iconic American underdog. Anyone who has a soft spot for Tucker will enjoy reading this book…” —Hemmings Classic Car