A World Restored: Metternich, Castlereagh and the Problems of Peace, 1812-22 (Hardcover) 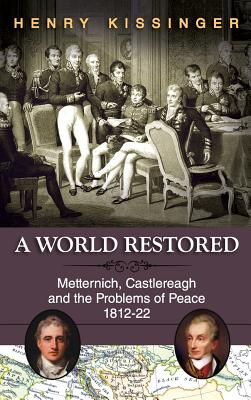 By Henry a. Kissinger
Email or call for price (info@riverbendbookshop.com)

Years before he was Secretary of State and winner of the Nobel Peace Prize, Henry Kissinger wrote A World Restored to understand and explain one of history's most important and dramatic periods-a time when Europe went from political chaos to a balanced peace that lasted for almost a hundred years.

After the fall of Napoleon, European diplomats gathered in a festive Vienna with the task of restoring stability following the French Revolution, the Napoleonic Wars, and the dissolution of the Holy Roman Empire. The central figures at the Congress of Vienna were the Foreign Secretary of the United Kingdom, Viscount Castlereagh and the Foreign Minister of Austria Klemens Wenzel von Mettern Metternich. Castlereagh was primarily concerned with maintaining balanced powers, while Metternich based his diplomacy on the idea of legitimacy-that is, establishing and working with governments that citizens accept without force. The peace they brokered lasted until the outbreak of World War I.

Through trenchant analysis of the history and forces that create stability, A World Restored gives insight into how to create long-lasting geopolitical peace-lessons that Kissinger saw as applicable to the period immediately following World War II, when he was writing this book.

But the lessons don't stop there. Like all good insights, the book's wisdom transcends any single political period. Kissinger's understanding of coalitions and balance of power can be applied to personal and professional situations, such as dealing with a tyrannical boss or coworker or formulating business or organizational tactics.

Regardless of his ideology, Henry Kissinger has had an important impact on modern politics and few would dispute his brilliance as a strategist. For anyone interested in Western history, the tactics of diplomacy, or political strategy, this volume will provide deep understanding of a pivotal time.