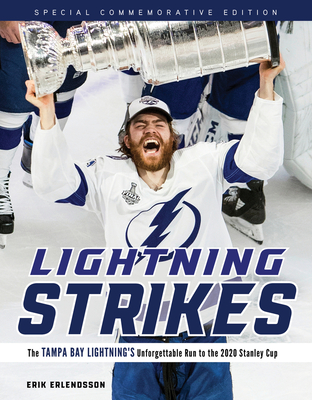 Lightning did strike twice in 2020, as the Tampa Bay Lightning triumphed over the Dallas Stars to seize their second Stanley Cup in franchise history.

Lightning Strikes: The Tampa Bay Lightning's Unforgettable Run to the 2020 Stanley Cup takes Bolts fans through the surreal and remarkable 2019-2020 season, in which the perennial contenders finally claimed the ultimate prize. Whether striving to prove their worth following 2019's shocking early playoff elimination, dealing with the long-term injury of captain Steven Stamkos or adapting to new norms amid a global pandemic, Jon Cooper's squad demonstrated clear vision and incredible heart on their path to victory. Through insightful stories from longtime Lightning insider Erik Erlendsson and dynamic photos, relive all the key moments, including the exuberant five-overtime win against the Columbus Blue Jackets, hard-fought playoff series against the Boston Bruins and New York Islanders and finally hoisting the Stanley Cup in the Edmonton bubble after triumphing over the Stars. This commemorative book also features in-depth stories on popular figures like Stamkos, Cooper, Victor Hedman, Brayden Point, and more.

Erik Erlendsson is a 20-year veteran of the Tampa Bay Lightning beat, starting with The Tampa Tribune in 2000 and continuing on with LightningInsider.com in 2016, witnessing the ups and downs of a non-traditional franchise that has won two Stanley Cups during that span. Erik has been involved in Tampa sports media since 1996 covering high school sports, the Tampa Bay Rays, Tampa Bay Buccaneers, Tampa Bay Mutiny and New York Yankees. A graduate of the University of South Florida, Erik and his wife Judy live outside Tampa, where they have raised their four boys – Kyle, Kevin, Kelsey and Kiernan.