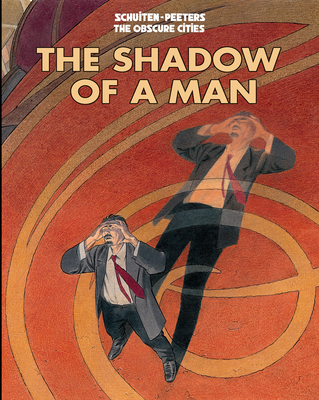 The fourth release in Alaxis Press' The Obscure Cities series to be published by IDW brings the award winning graphic novels to readers in English for the first time!

Newly married Albert Chamisso is having horrific nightmares. Eccentric doctor Polydore Vincent is able to give him relief, but the experimental treatment has a strange side effect: from now on, Albert's shadow will be cast in color. This seemingly inconsequential development brings his life crashing down, ultimately losing him his job and his new wife. Evicted from his home, he moves to the outskirts of Blossfeldtstad where he meets the beautiful and talented Minna, who will help turn his curse into a gift. Together they will create something special, a performance of light and shadow unlike any seen before. The Shadow of a Man is an unforgettable, retro-futurist tale of bittersweet noir romance.

Benoît Peeters was born in Paris on August 28, 1956. After publishing two novels early in his career, he experimented with diverse genres: essay, biography, illustrated story, photo novel, film, television, radio theater and of course comics. An Hergé specialist, he has written three books to date on the subject: The World of Hergé, Hergé, Son of Tintin, and Read Tintin. He is also the author of several books on comics, storyboards and biographical studies on Hitchcock, Nadar, Jacques Derrida and Paul Valéry

François Schuiten was born in Brussels on April 26, 1956, into a family of architects. Since 1980, he has worked with Benoît Peeters on The Obscure Cities series. His graphic novels have been translated into a dozen languages and have received numerous international awards. He has also created many illustrations, posters and postage stamps across Europe. In 2002, he received the prestigious lifetime achievement award from the Angouleme festival. He published his first solo effort, The Beauty, in 2012, and designed a train museum, Train World, which opened in Brussels in 2015. His 2014 exhibition and accompanying book, Revoir Paris, has met with international praise.