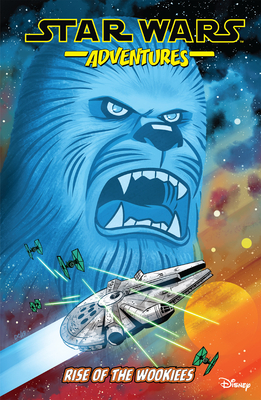 This is book number 11 in the Star Wars Adventures series.

Journey deeper into the world of Star Wars with these stories set just before the events of The Rise of Skywalker!

With Kashyyk under siege from the evil First Order, can Chewbacca and the Wookiees successfully defend their home world? Next, the droids must carry out a special undercover mission, but will C-3PO be able to adapt when the mission parameters change? Then, discover secrets of your favorite characters in a trio of stories spotlighting the newest heroes and villains of the Star Wars universe, Rey, Finn, and Kylo Ren! All this, plus new "Tales from Wild Space"!

John Barber is IDW's Editor-In-Chief. A former editor at Marvel, his comics writing credits include: Transformers, Optimus Prime, Spidey, Doctor Strange, Back to the Future, and many other projects across many other media. He lives in San Diego with his family.

Michael Moreci is a novelist and author of comic books. His comics include the critically acclaimed sci-fi trilogy Roche Limit and the military horror drama Burning Fields. He's also written Suicide Squad for DC, Planet of the Apes for Boom!, and his other original titles include Curse, Hoax Hunters, ReincarNATE, and Black Hole Repo. As a novelist, Michael is the author of Spy Swap, an espionage thriller for Tor/Forge. He lives in Chicago with his wife, two sons, and dog.