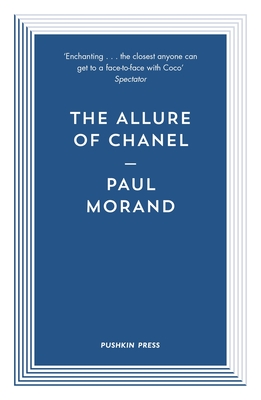 By Paul Morand, Euan Cameron (Translated by)
$17.55
Email or call for price

Coco Chanel invited Paul Morand to visit her in St Moritz at the end of the Second World War when he was given the opportunity to write her memoirs; his notes of their conversations were put away in a drawer and only came to light one year after Chanel's death. Through Morand's transcription of their conversations, Chanel tells us about her friendship with Misia Sert, the men in her life - Boy Capel, the Duke of Westminster, artists such as Diaghilev, her philosophy of fashion and the story behind the legendary Number 5 perfume...The memories of Chanel told in her own words provide vivid sketches and portray the strength of Coco's character, leaving us with an extraordinary insight into Chanel the woman and the woman who created Chanel.

Pushkin Collection editions feature a spare, elegant series style and superior, durable components. The Collection is typeset in Monotype Baskerville, litho-printed on Munken Premium White Paper and notch-bound by the independently owned printer TJ International in Padstow. The covers, with French flaps, are printed on Colorplan Pristine White Paper. Both paper and cover board are acid-free and Forest Stewardship Council (FSC) certified.

Paul Morand was born in Paris in 1888 and after studying at the Ecole des Science Politiques he joined the diplomatic corps, serving in London, Rome, Berne and Bucharest. His first collection of stories Tendres Stocks (1921), had an introduction by his friend Marcel Proust. In a long and busy life, he found time to write poetry, novels, short stories and travel books. Morand was made a member of the Academie Francaise in 1963. He was married to the Romanian princess Hélène Soutzo, and he died in 1976 the year the first edition of The Allure of Chanel was published in Paris.

"It's an interesting memoir because it's all about what she thinks not what she did." - David Patrick Columbia, The New York Social Diary

"Morand was a citizen of the world, with a sharp eye and a neat turn of phrase." - The Tablet

"This enchanting, tiny book is the closest anyone can get to a face-to-face with Coco. It's written in her voice ('that voice that gushed forth from her mouth like lava') and in her words ('those words that crackled like dried vines'), and though it's full of lies, omissions and contradictions, there's enough raw truth in it to reflect the extraordinary woman who was Chanel, even though glimpsed shard by shard in a broken mirror." - The Spectator

"Paul Morand recaptures a WWII-era conversation between the author and the fashion icon." -Publisher's Weekly

"Reads beautifully ... this enchanting book is the closest anyone can get to a face-to-face with Coco... written in her voice and in her words." - The Spectator