Flying Scotsman: The Extraordinary Story of the World's Most Famous Locomotive (Hardcover) 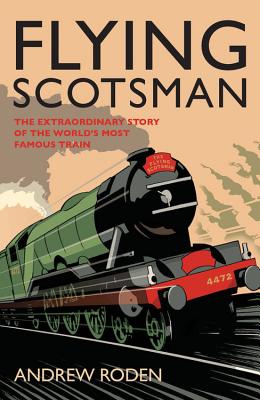 By Andrew Roden
Email or call for price (info@riverbendbookshop.com)
Out of Print

The incredible biography of the most famous steam locomotive in the world.

Think of the Golden Age of Steam and one train leaps to mind above all others: the Flying Scotsman, Nigel Gresley's elegant masterpiece of a locomotive. She broke the world speed record in 1934 and has enthralled millions with her beauty and power. Uniquely, her post-war career has been even more varied and exciting than her early triumphs.

Now Andrew Roden tells the Scotsman's remarkable story, from her construction and the glory days between the wars through the decline of steam and her rollercoaster fortunes in the subsequent years: nearly abandoned on a tour of the United States after the money ran out, crossing the Australian interior, then put up for sale yet again when the company that owned her went bankrupt in 2003. A massive public campaign saved her and the Flying Scotsman's restoration began in 2005 at the National Railway Museum in Britain.

ANDREW RODEN is a railway journalist and campaigner now based in Cornwall. He has worked on a range of railway magazines over the past decade from Rail to Hornby Magazine and the prestigious International Railway Journal as Contributing Editor. In 2005 he led the campaign to save the ‘Night Riviera’ sleeper train to Cornwall from closure. He is author of the highly successful books Flying Scotsman, A History of the Great Western Railway and The Duchesses, all published by Aurum Press.

‘an absorbing new book… The author is to be congratulated’

‘Her spirit lives on – and Roden has brought it back, wreathed in clouds of nostalgic steam’

â??Her spirit lives on â?? and Roden has brought it back, wreathed in clouds of nostalgic steamâ??

â??an absorbing new bookâ?¿ The author is to be congratulatedâ??