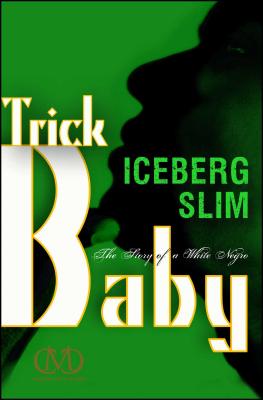 The author that brought black literature to the streets is back. Weaving stories of deceit, sex, humor, and race, bestselling author Iceberg Slim brings us the story of a hustler who doesn’t just play the con game, he transforms it.

This is the gritty truth, the life of a hustler in south side Chicago where the only characters are those who con and those who get conned.

Trick Baby tells the story of “White Folks,” a blue-eyed, light-haired, con artist whose pale skin allows him to pass in the streets as a white man. Folks is tormented early in life, rejected by other children and branded a “Trick Baby,” the child conceived between a hooker and her trick. Refusing to abandon his life in the ghetto and a chance at revenge, Folks is taken under the wing of an older mentor, Blue. What happens next is not to be believed.

Iceberg Slim, also known as Robert Beck, was born in Chicago in 1918 and was initiated into the life of the pimp at age eighteen. He briefly attended the Tuskegee Institute but dropped out to return to the streets of the South Side, where he remained, pimping until he was forty-two. After several stints in jail he decided to give up the life and turned to writing. Slim folded his life into the pages of seven books based on his life. Catapulted into the public eye, Slim became a new American hero, known for speaking the truth whether that truth was ugly, sexy, rude, or blunt. He published six more books based on his life and Slim died at age 73 in 1992; one day before the Los Angeles riots.