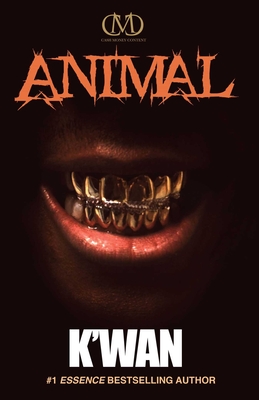 K’wan, one of this generation’s most talented and gritty writers, delivers his bloodiest story yet. Animal follows the infamous fugitive from K’wan’s best-known Hood Rat Series on a revenge mission from the rugged streets of Puerto Rico to the scene of the original crime, Harlem, NY.

"One bullet changed everything."

Three years after narrowly escaping a one-way trip to the gas chamber, the fugitive known only as Animal finds himself drawn back to the scene of the crime, Harlem, NY.

Throughout his entire time in exile the only thing that kept Animal going was the thought that he would one day be reunited with his soulmate, Gucci, but one bullet changed everything. When his enemies tried to murder Gucci, they crossed the line—so he vows to cross them all.

While Gucci teeters between life and death, Animal sets out on a bloody mission fueled by love and orchestrated by bullets—there would be no more innocents. Alliances are formed and secrets uncovered while Animal wages his personal war on the streets of Harlem with the end result revealing one great truth—he is only a small piece in a much greater puzzle.

K’wan is the #1 bestselling author of Welfare Wifeys, Section 8, Gutter, Still Hood, Hood Rat, Eve, Hoodlum, Street Dreams, Gangsta, Road Dawgz and now Animal. Animal was chosen as one of the five Best Books of 2012 and the starred pick of the month for October on Library Journal. K’wan has also been featured in Time, King, The New York Press, and on MTV and BET. K’wan currently resides in New Jersey where he is working on his next novel.