Apropos of Nothing: Autobiography (Paperback) 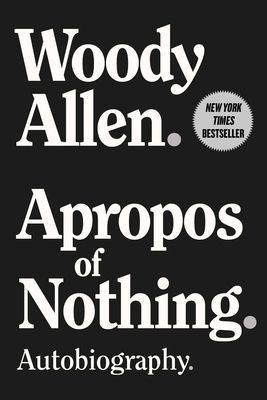 The Enormously Entertaining Memoir by One of the Great Artists of Our Time—Now a New York Times, USA Today,
Los Angeles Times, and Publishers Weekly Bestseller.

In this candid and often hilarious memoir, the celebrated director, comedian, writer, and actor offers a comprehensive, personal look at his tumultuous life. Beginning with his Brooklyn childhood and his stint as a writer for the Sid Caesar variety show in the early days of television, working alongside comedy greats, Allen tells of his difficult early days doing standup before he achieved recognition and success. With his unique storytelling pizzazz, he recounts his departure into moviemaking, with such slapstick comedies as Take the Money and Run, and revisits his entire, sixty-year-long, and enormously productive career as a writer and director, from his classics Annie Hall, Manhattan, and  Hannah and Her Sisters to his most recent films, including Midnight in Paris. Along the way, he discusses his marriages, his romances and famous friendships, his jazz playing, and his books and plays. We learn about his demons, his mistakes, his successes, and those he loved, worked with, and learned from in equal measure.

This is the hugely entertaining, deeply honest, rich and brilliant self-portrait of a celebrated artist who is ranked among the greatest filmmakers of our time.

Woody Allen is a writer, director, and actor. He has been a stand-up comedian and a published author. He lives on the Upper East Side of Manhattan with his wife of twenty-two years, Soon-Yi, and their two daughters, Manzie and Bechet. He is an avid jazz enthusiast and devoted sports fan. In his own words, he regrets that he has never made a great film, though he says he is still trying.

“A lively tale of growing up lower-middle-class in Brooklyn; a gossipy account of scrambling up the comedy ladder from tabloid gag writer to Oscar winner . . . This memoir is for the most part a pleasure to read and entertaining company. . . . You’d have to be a real sourpuss not to laugh at the fusillade of one-liners, two-liners, three-liners and so on.”—Peter Biskind, Los Angeles Times

“He has an authentic and easygoing voice on the page.”—New York Times
“It’s a fantastic book, so funny. . . . You feel like you’re in the room with him and yeah, it’s just a great book and it’s hard to walk away after reading that book thinking that this guy did anything wrong.”—Larry David

“An absolute delight, hilarious and endearing and glistening with stardust.”—National Review

“Master, from youth, at self-deprecating humor, and born with New York City cojones, Allen says what others just think, controversy be damned.”—New York Journal of Books

“It was a laugh a minute.”—Newark Star-Ledger

"An enjoyable excursion into the mind, personality, and delicious whimsy of Woody Allen . . . one of our finest filmmakers and a man of droll wit, who came of age as an artist in the 1970s, just in time for his unique combination of cynicism and romanticism, as old gods died and new ones failed to appear."—Jim Delmont, Omaha Dispatch

“His wit is on full display.”—The Federalist