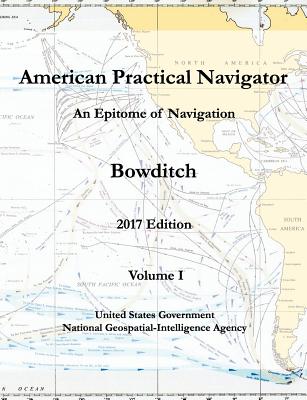 By National Geospatial-Intelligence Agency
$28.59
Ships to our store in 3-8 Days

American Practical Navigator An Epitome of Navigation Bowditch 2017 Edition Volume I As much as it is a part of history, Bowditch is not a history book. In this edition, as in past editions, dated material was dropped and new methods, technologies and techniques added to keep pace with changes in the practice of navigation. The changes are intended to ensure Bowditch remains the premier reference work for modern, practical marine navigation. This 2017 edition replaces but does not cancel former editions, which may be retained and consulted as to historical navigation methods not discussed herein. Due to critical feedback from academia, the 2017 edition reconstitutes several deleted or abridged chapters removed from the previous two editions. The additional text warranted the return of a two-volume format, with the useful tables and glossary of marine navigation located in volume II. PART 1, FUNDAMENTALS, includes an overview of the topic of marine navigation and the organizations which develop, support and regulate it. These fundamentals include chapters relating to geodesy and chart datums; modern hydrography; the types, structure, use and limitations of nautical charts; electronic chart display and information systems; and finally, a concise explanation and summary of the various navigational publications necessary for prudent marine navigation. PART 2, PILOTING, mainly emphasizes the practical aspects of navigating a vessel in restricted waters, using both traditional and electronic methods. The closely related problem of finding the course & distance between one known point and another, and using The Sailings, is also discussed. PART 3, CELESTIAL NAVIGATION, reflects the renewed interest in the age old art and science of navigation by the stars, planets, moon and sun. The update recognizes the trend to over rely on GPS and electronic navigation by offering the tried and true alternative method in the event of electronic failures. PART 4, INERTIAL NAVIGATION, is often referred to as a sophisticated dead reckoning method. The topic is re-introduced in the 2017 edition. PART 5, RF NAVIGATION TECHNIQUES, explains the nature of radio waves and electronic navigation systems. Chapters deal with several electronic methods of navigation--satellite, Loran, and Radar, with special emphasis on satellite navigation systems. PART 6, ALTERNATIVE NAVIGATION TECHNIQUES, addresses the topic of bathymetric navigation. This comes in direct response to several Bowditch survey responses received by NGA. Doppler sonar navigation is also reintroduced. PART 7, NAVIGATIONAL SAFETY, discusses recent developments in management of navigational resources, the changing role of the navigator, distress and safety communications, procedures for emergency navigation, and the increasingly complex web of navigation regulations. PART 8, ICE & POLAR NAVIGATION, in the Arctic is of renewed interest to the navigator as ice-free conditions allow shorter sailing distances. That said, a chapter on polar navigation is reintroduced in the 2017 edition. PART 9, OCEANOGRAPHY, has been updated to reflect the latest science and terminology. PART 10, MARINE METEOROLOGY, incorporates updated weather information and many new graphics.