The Trial of the Chicago 7: The Official Transcript (Paperback) 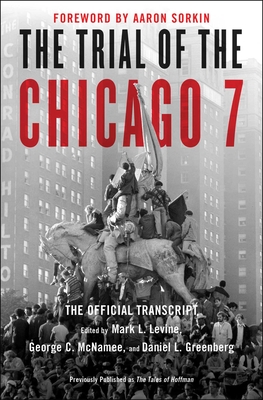 Republished fifty years later to coincide with the release of the Academy Award–nominated film of the same title written and directed by Aaron Sorkin with an all-star cast, this is the classic account of perhaps the most infamous, and definitely the most entertaining, trial in recent American history.

In the fall of 1969 eight prominent anti-Vietnam War activists were put on trial for conspiring to riot at the 1968 Democratic National Convention in Chicago. One of the eight, Black Panther cofounder Bobby Seale, was literally bound and gagged in court by order of the judge, Julius Hoffman, and his case was separated from that of the others.

The activists, who included Abbie Hoffman, Jerry Rubin, and Tom Hayden, and their attorneys, William Kunstler and Leonard Weinglass, insisted that the First Amendment was on trial. Their witnesses were a virtual who’s who of the 1960s counterculture: Allen Ginsberg, Timothy Leary, Arlo Guthrie, Judy Collins, Norman Mailer, among them.

The defendants constantly interrupted to protest what they felt were unfair rulings by the judge. The trial became a circus, all the while receiving intense media coverage. The convictions that resulted were subsequently overturned on appeal, but the trial remained a political and cultural touchstone, a mirror of the deep divisions in the country. The Trial of the Chicago 7 consists of the highlights from trial testimony with a brief epilogue describing what later happened to the principal figures.

Mark L. Levine is a lawyer, writer, and teacher who practiced corporate banking and publishing law in New York City for over forty years. He is also an experienced voter protection lawyer. His previous books include Negotiating a Book Contract and The Complete Book of Bible Quotations. A graduate of Columbia College, NYU School of Law, and Columbia University Graduate School of Journalism, he has taught at Benjamin N. Cardozo School of Law and Zicklin School of Business/Baruch College.

George McNamee is Chairman of Plug Power, a pioneer of the hydrogen economy.  He has served as venture investor and board member of emerging growth companies including iRobot. In 2011, he was the first history major awarded the Yale Science and Engineering Association Distinguished Service Award. He served on the board of the New York Stock Exchange and is a Trustee of The American Friends of Eton College. He is a 1969 graduate of Yale University.

Daniel Greenberg is head of pro bono at Schulte Roth & Zabel, a major New York law firm. From 1994 to 2004, he was attorney-in-chief of the Legal Aid Society. Prior to that he was director of clinical programs at Harvard Law School after being a legal services lawyer on New York’s Lower East Side. He is a former president of the New York City chapter of the National Lawyers Guild. Danny received his law degree from Columbia in 1969.

Aaron Sorkin is a writer, producer, and director who has worked in film, television, and theater. He first gained attention for his play A Few Good Men, a major success on Broadway, which he later adapted into an acclaimed movie. He is the author of many screenplays including Malice, The American President, Charlie Wilson’s War, The Social Network (winner of an Academy Award for best-adapted screenplay), and Moneyball. His well-known work in television includes the highly acclaimed The West Wing, which won nine Emmy Awards in its first season alone, and The Newsroom. Sorkin made his directorial debut with Molly’s Game, which he adapted from a memoir by Molly Bloom (and which was nominated for an Academy Award for best-adapted screenplay). In 2018 Sorkin’s adaptation of Harper Lee’s classic To Kill a Mockingbird premiered on Broadway, and was nominated for nine Tony Awards.

“Journalism at its best.”
—The Boston Globe