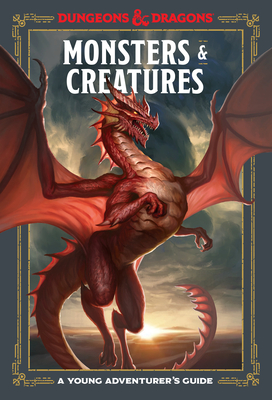 This introductory guide to DUNGEONS & DRAGONS provides a fun and immersive primer to its beasts and monsters.

In this illustrated guide, you're transported to the legendary and magical worlds of Dungeons & Dragons and presented with one-of-a-kind entries for some of its most sinister, foul, and memorable monsters. Featuring amazing illustrations and expert insights on some of D&D's most dangerous monsters, the guide shines a spotlight on the beasts that scare, excite, and cause trouble for adventurers, from creatures that live underground, to those that dwell in the wilderness and boneyards or soar in the sky. In these profiles you will find information on the size of each monster, its danger level, and tips for how to survive an encounter. The perfect entry point for young fans of fantasy eager to become D&D adventurers, this book also features introductory "Encounter" stories so readers can practice the problem-solving skills they'll need to fight these monsters when they play a D&D adventure of their own.

Dungeons & Dragons launched the great tradition of roleplaying games in 1974 with an unprecedented mix of adventure and strategy, dice-rolling, and storytelling. Wizards of the Coast continues to honor that tradition, bringing to market a diverse range of D&D game and entertainment experiences and influencing numerous writers, directors, and game designers by tapping into an innate human need to gather with friends and tell an exciting story together.

Jim Zub is a writer, artist, and art instructor based in Toronto, Canada. Over the past twenty years he’s worked for a diverse array of publishing, movie, and video game companies including Marvel Comics, Disney, Capcom, Hasbro, Cartoon Network, and Bandai Namco. He’s been writing the official Dungeons & Dragons comic series since the launch of the fifth edition in 2014.

Stacy King is a Toronto-based author who began rolling her way through dungeon adventures when she was ten years old. Formerly the editor and lead writer for the Manga Classics line, she has overseen graphic novel adaptations of classic literary novels like Pride and Prejudice, Les Misérables, and Dracula. She has a B.A. in English literature from the University of Toronto. In her spare time, she enjoys historical costuming, baking, and board games.

Andrew Wheeler is a Shuster and Eisner Award–winning writer and editor born in the UK and based in Toronto. He has written for television, video games, comics, and prose. His works include the comics series Another Castle and Freelance and the LGBTQ young adult anthology Shout Out.

“This book is creative idea fuel. . . . WotC and Ten Speed really hit it out of the park with these books”—Bleeding Cool

”As more and more new players find D&D, it’s books like these that can help the game continue to grow by introducing younger players to the game.”—Geek Dad

“This beautifully-illustrated publication (the first of several companions) is your one-stop shop for spotting and identifying the fauna of the D&D universe, from dragons to Demogorgons. . . . You probably shouldn't venture into a storyline without it at your side.”—SyfyWire

“No matter how old you are if you have ever had an interest in D&D these Young Adventurer’s Guides are something you need to check out.”—The NerdyGirl Express

“With all-new illustrations and explanations of Dungeons & Dragons’s rules, character creation, monsters, and more for ages eight and up, there’s never been a better time to bring your kids to the table.”—Geek & Sundry

“Monsters & Creatures is a fun introduction for early readers and gamers, simplifying the information so it can be understood.”—Geeks of Doom

“Monsters & Creatures is a refreshing new take on the world and lore of D&D, sure to delight young readers, spark their imagination, and inspire them to tell stories of their own. Cover to cover, it’s great fun.” —d20 Diaries

“They provide a useful starting point, with background on characters and creatures. The books are well-designed and easy to read; my son is now officially hooked.”—The Film Stage

“However, if you’re new or someone you know is new and possibly interested in playing, especially if they’re a middle school or high school aged person, then this is a great way to get an easier to read version of the flavor text from the Player’s Handbook.”—Geek Tyrant