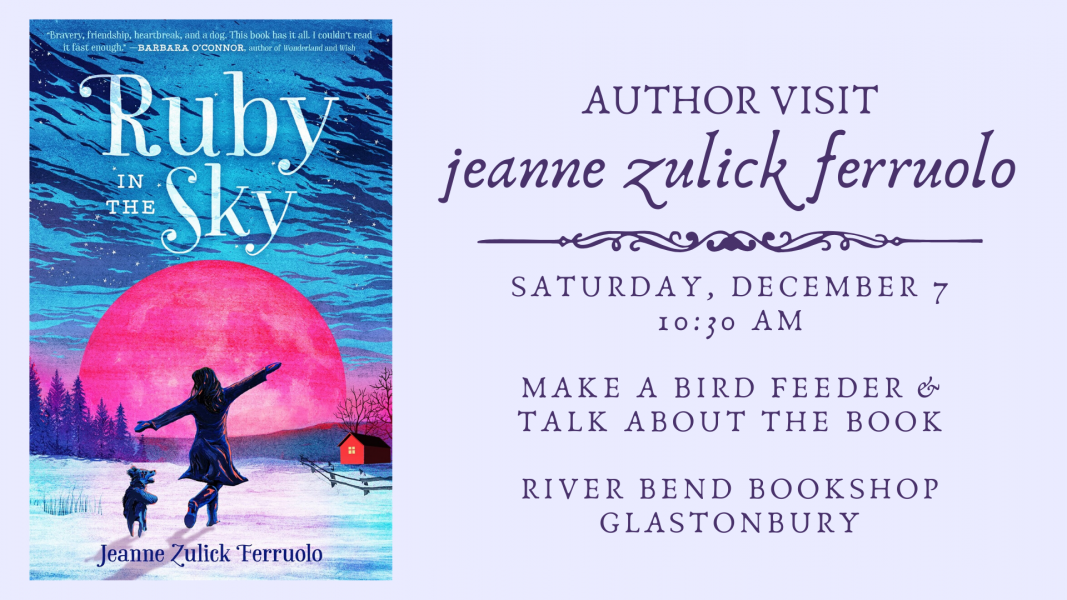 River Bend welcomes the author of Ruby in the Sky, Jeanne Zulick Ferruolo, to the bookshop for a winter craft and book signing on Saturday, December 7th at 10:30am.  The book and event are ideal for kids in 4th to 7th grade.

In this heartfelt middle-grade debut about family, friendship, and finding your own identity, Ruby Moon Hayes learns there's more to a person's story than what other people tell.

When twelve-year-old Ruby Moon Hayes and her mother move to Vermont, Ruby’s goal is to stay as silent and invisible as a new moon in the frozen sky. She doesn’t want kids at school asking about her missing father or discovering that her mother has been arrested. But hiding isn’t easy when Ahmad Saleem, a Syrian refugee, decides he’s her new best friend. Or when she meets “the Bird Lady,” a recluse named Abigail, who lives in a ramshackle shed near Ruby’s house. No one in town understands Abigail—people whisper about her, about her boarded-up house and the terrible secrets she must be hiding.

As Mom’s trial draws near and Abigail faces eviction, Ruby is forced to make a choice: break her silence or risk losing everyone she loves.

Jeanne Zulick Ferruolo lives in Ellington, Connecticut, with her husband, Paul, her children, Andrew and Sophia, and a poorly behaved golden retriever named Meadow.  Her next novel, A Galaxy of Sea Stars, publishes with  Farrar, Straus and Giroux in February 2020.

Ruby in the Sky (Hardcover)

A Galaxy of Sea Stars (Hardcover)

END_OF_DOCUMENT_TOKEN_TO_BE_REPLACED

Powered by My Must Reads