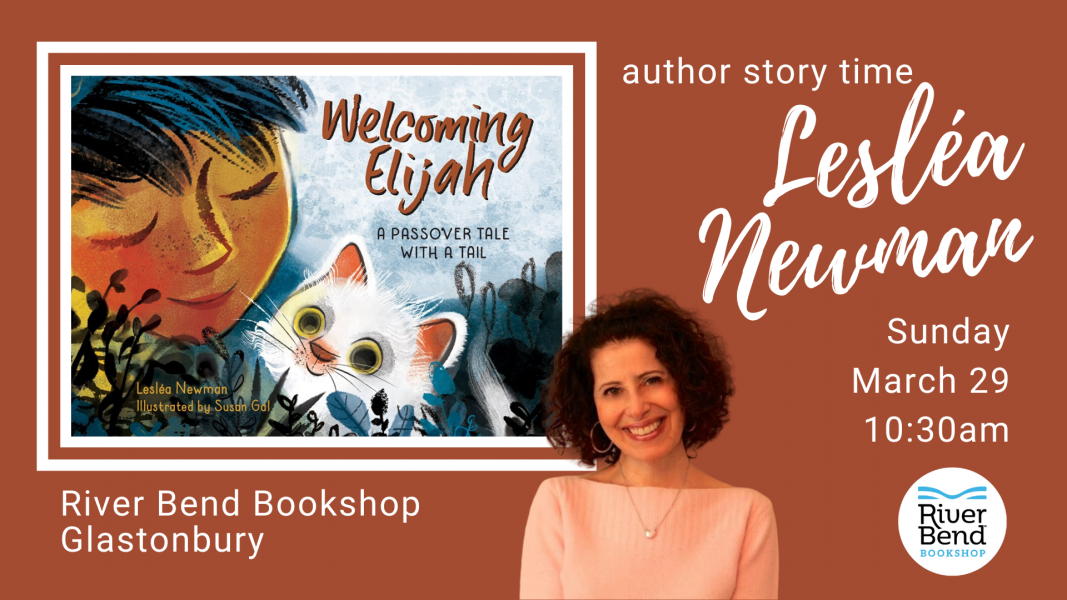 River Bend is proud to welcome Lesléa Newman as she shares her new picture book Welcoming Elijah: A Passover Tale with a Tail.

All are welcome for this free event.  Registration is requested so that we may ensure enough space is available.

Inside, a boy and his family sit around the dinner table to embrace the many traditions of their Passover Seder around the dinner table. Outside, a cat wonders, hungry and alone. When it’s time for the symbolic Passover custom of opening the family’s front door for the prophet Elijah, both the boy and the cat are in for a remarkable surprise.

Lesléa (pronounced “Lez-LEE-uh”) is the author of 70 books for readers of all ages, including A Letter to Harvey Milk; October Mourning: A Song for Matthew Shepard; I Carry My Mother; The Boy Who Cried Fabulous; Ketzel, the Cat Who Composed; and Heather Has Two Mommies.

She has received many literary awards, including creative writing fellowships from the National Endowment for the Arts and the Massachusetts Artists Foundation, two American Library Association Stonewall Honors, the Massachusetts Book Award, the Association of Jewish Libraries Sydney Taylor Award, the Highlights for Children Fiction Writing Award, a Money for Women/Barbara Deming Memorial Fiction Writing grant, the James Baldwin Award for Cultural Achievement, the Cat Writer’s Association Muse Medallion, and the Dog Writers Association of America’s Maxwell Medallion. Nine of her books have been Lambda Literary Award Finalists.

Ms. Newman wrote Heather Has Two Mommies, the first children’s book to portray lesbian families in a positive way, and has followed up this pioneering work with several more children’s books on lesbian and gay families: Felicia’s Favorite Story, Too Far Away to Touch, Saturday Is Pattyday, Mommy, Mama, and Me, and Daddy, Papa, and Me.

She is also the author of many books for adults that deal with lesbian identity, Jewish identity and the intersection and collision between the two. Other topics Ms. Newman explores include AIDS, eating disorders, butch/femme relationships, and sexual abuse. Her award-winning short story, A Letter To Harvey Milk, has been made into a film and adapted for the stage.

In addition to being an author, Ms. Newman is a popular guest lecturer, and has spoken on college campuses across the country including Harvard University, Yale University, the University of Oregon, Bryn Mawr College, Smith College and the University of Judaism. From 2005-2009, Lesléa was on the faculty of the Stonecoast MFA program at the University of Southern Maine. From 2008-2010, she served as the Poet Laureate of Northampton, MA. She has taught fiction writing at Clark University and currently she is a faculty mentor at Spalding University’s brief residency MFA in Writing program.

Welcoming Elijah: A Passover Tale with a Tail (Hardcover)

Here Is the World: A Year of Jewish Holidays (Hardcover)